Omeruo: Morale Is High In Eagles’ Camp Ahead Russia 2018 By Bamidele Boluwaji:
Super Eagles defender, Kenneth Omeruo, says tha team spirit in camp of the Super Eagles is high ahead of the 2018 FIFA World Cup in Russia this summer, Completesportsnigeria.com reports

The Nigeria international who is on loan to Kasimpasa of Turkey, told CSN from the team’s Uyo camp that every player is talking about the World Cup, therefore making the camp more lively.

The 2013 AFCON champion assures that is not feeling any pressure as they continue their build-up to the World Cup.
He also adds that the Super Eagles will take every game as they come. 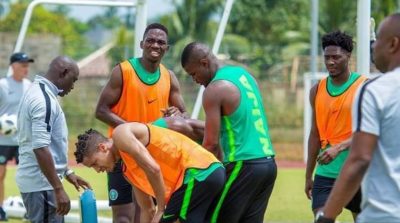 “The spirit is high and everyone is talking about the World Cup,” Omeruo tells Completesportsnigeria.com.

“We are used to one another and we are one family, so I won’t say there is any pressure in camp. We are just doing our best to prepare for the World Cup because every player wants to be there.”

Omeruo who is hoping to return to England to rejoin Chelsea after the World Cup , admits he has to work really hard in Russia.

He states: “Yes, every player knows that, I have to work hard in Russia because after that we will be talking about the pre-season and that is where the focus of coaches will be shifted to.”