By Johnny Edward:
Kenneth Omeruo says the Super Eagles will be aiming to beat a ‘strong Libyan side’ over two legs when both teams clash in their 2019 Africa Cup Of Nations qualifying double-header, reports Completesportsnigeria.com.

Nigeria will host Libya in the first leg at the Akwa Ibom International Stadiu Uyo on Saturday, 13th October with the reverse fixture billed for the Stade Taieb Mhiri in the city of Sfax, Tunisia on Tuesday, 16th October.

Omeruo who is looking forward to his 42nd appearance for the Super Eagles on Saturday is banking on the team’s great squad to triumph in Uyo.

“We will be up against a strong Libya side. But we are the Super Eagles and we have a great squad,” Omeruo was quoted on the official Twitter handle of the Super Eagles.

“We will give our all to pick maximum points from both games.

“I have confidence in the entire crew. We urge our fans to give us all the support. We will not disappoint you all.” 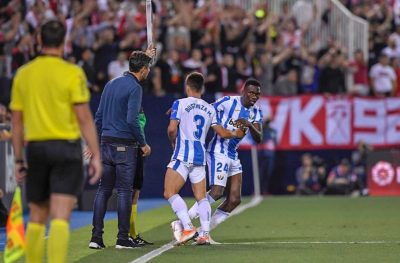 Omeruo made a winning debut for his Spanish La Liga side, Leganes on Saturday coming on for Unai Bustinza in the 29th minute after the right back twisted his ankle during the game in their 1-0 home win over ten-man Rayo Vallecano.

Prior to the game, Omeruo had been an unused substitute for Leganes in their previous games against Real Madrid, Villarreal, and Real Betis.

He is expected to arrive the Super Eagles hotel later today (Monday) for the game.