Hours to the Super Eagles opening Russia 2018 World Cup game against Croatia in Kalinigrad, Completesportsnigeria.com’s JOHNNY EDWARD chronicles how the Super Eagles have fared in their opening games in their past five FIFA World Cups…

Nigeria made their debut at the 2018 FIFA World Cup in USA 1994 and announced their arrival at the biggest stage by defeating Bulgaria 3-0. On the back of their triumph at the 1994 Africa Cup of Nations in Tunisia, the Super Eagles got off to a bright start in the game as the late Rashidi Yekini tapped in George Finidi’s cross in the 21st minute. Daniel Amokachi and Emmanuel Amuneke were the other scorers for Nigeria in the game. The Clemens Westerhof-led side lost 2-1 to a Diego Maradona-inspired Argentina side in their second game. They bounced back to winning ways in their final group game against Greece, recording a 2-0 win to advance to the second round where they lost to Italy 2-1. Nigeria were brought down to earth after Emmanuel Amuneke had opened scoring for the Super Eagles.

Having missed out, through a ban, on the 1998 Africa Cup of Nations in Burkina Faso which Egypt won, the Super Eagles qualified for the World Cup hosted in France. On the back of their sterling performance at the 1996 Atlanta Olympics, the world awaited to see the birth of a new footballing superpower in Nigeria.

Nigerians just like in their opening game in 1994 started with a win, defeating Spain 3-2 in a five-goal thriller. Spain were undefeated in their qualifying series in Europe. That defeat severely affected the Spanish side as they failed to reach the next round.

The Super Eagles sealed qualification for the next round by defeating Bulgaria 1-0 in their second game only to lose 3-1 to Paraguay in their final group game.

Nigeria hit a bad patch in their second round clash against Denmark, losing 4-1. The Danes went ahead in the third minute through Peter Moller. Brian Laudrup made it 2-0 after 12 minutes. Ebbe Sand and Thomas Helveg completed the rout scoring in the 60th and the 76th minutes before Tijani Babangia grabbed a consolatory goal for Nigeria.

Nigeria faced Argentina for the second time at the FIFA World Cup and lost 1-0 In 2002. A Gabriel Batistuta’s header condemned the Super Eagles to an opening defeat. It was the first time they lost their opening game at the World Cup. Nigeria’s second group game against Sweden did not go as planned despite getting off to a bright start with Julius Aghahowa heading in Joseph Yobo’s cross from the right flank. Henrik Larsson scored a brace to condemn Adegboye Onigbinde’s side to an early exit. Their final game ended in a goalless draw with England.

Argentina continued their dominance over Nigeria at the 2010 FIFA World Cup in South Africa by winning 1-0. Gabriel Heinze was the match winner for La Albiceleste. The Nigerian team lost their second game 2-1 to Greece but were still in contention for a place in the second round if they recorded a win in their final game against South Korea. That was not to be as they played a 2-2 draw, ending their hopes of advancing to the second round for the second time in four appearances at the FIFA World Cup.

The 2014 World Cup in Brazil saw Nigeria record their first draw in their opening game. Led by Stephen Keshi, Nigeria were held to a goalless draw by Iran. But with some changes in playing personnel, the Super Eagles returned to winning ways to edge Bosnia 1-0 in their second game courtesy of a strike from Osaze Odemwingie. Their final group game saw them lose 3-2 to an Argentine side inspired by Lionel Messi. Ahmed Musa scored a brace for Nigeria but it was not enough as a brace from Messi and another goal from Marcos Rojo condemned Nigeria to a fourth World Cup defeat in the hands of Argentina. In their second round clash against France, Nigeria lost 2-0 courtesy of a goal from Paul Pogba and an own goal from Joseph Yobo. 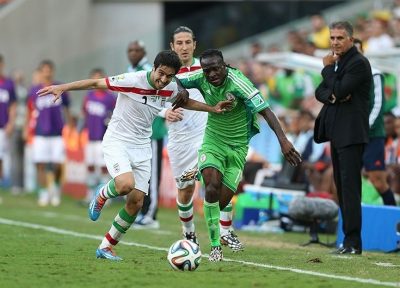