Onazi last scored for Trabzonspor four months ago in their 4-0 thrashing of Galatasaray on September 1.

The 25-year-old scored a brilliant solo goal in the 89th minute of the game after strikes from Hugo Rodallega in the 76th minute and Caleb Ekuban 40 seconds later had shot Trabzonspor into a 2-0 lead. It was Onazi’s 14th appearance of the season.

His compatriot Anthony Nwakaeme played for 89 minutes before he was replaced by Majid Hosseini in his eighth appearance this season. Nwakaeme has not scored a goal in his last six games for the club.

The win moves Trabzonspor to 4th position on the log with 25 points from 15 games.

Also in Turkey, Henry Onyekuru featured for 77 minutes before he was subbed off for Omer Bayram in Galatasaray’s 2-2 draw away at Rizespor.

The 21-year-old has scored four league goals in 13 league games. 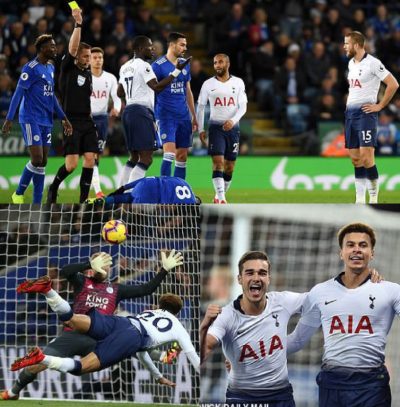 In the English Premier League, Super Eagles pair of Kelechi Iheanacho and Wilfred Ndidi made their ninth and 15th start of the season respectively, for Leicester City who lost 2-0 at home to Tottenham Hotspurs at the King Power Stadium.

While Iheanacho was replaced in the 56th minute by Rachid Ghezzal, Ndidi played the entire duration of the defeat which denied the Foxes a seventh English Premier League win of the season.

In Spain, Samuel Chukwueze, made his fourth La Liga start for Villarreal who lost 3-2 at home to Celta Vigo. He was subbed off in the 55th minute for Carlos Bacca who went on to bag a brace in the defeat.

Efe Ambrose played all 90 minutes for Hibernian who ended their seven-game winless streak with a 1-0 win over Hamilton Academical away from home. The win was Hibernian’s first in Scottish Premier League games since their last win over the same team in October.

In Russia, Brian Idowu was an unused substitute for FC Lokomotiv Moscow who defeated FC Orenburg 2-1 in a league game on Saturday.

Imoh Ezekiel made his first start for Kortrijk who played out a 1-1 draw away at KRC Genk. He was replaced in the 78th minute by Teddy Chevalier. His compatriot Abdul Jeleel Ajagun was an unused substitute in the game.

In the English Championship, Semi Ajayi saw 90 minutes of action in Rotherham United’s 2-2 away draw at Sheffield Wednesday.

At the Bet365 Stadium, Oghenekaro Etebo was not listed in the matchday squad for Stoke City who won 2-0 home at home against Ipswich Town.