By Johnny Edward:
Nigerian striker Paul Onuachu scored his first hat-trick of the season for FC Midtjylland who defeated FC Nordsjaelland 4-1 in a Danish Superliga game on Saturday Completesportsnigeria.com reports.

It was Onuachu’s second career hat-trick for Midtjylland. The strikes took his tally to eight so far this season.

The 24-year shot his side into the lead in the 33rd minute, but his goal was cancelled out by Godsway Donyoh for Nordsjaelland in the 50th minute. 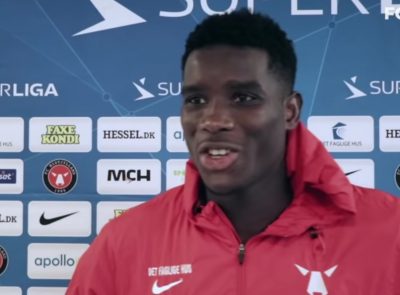 Onuachu completed his hat-trick 12 minutes from time after he was set up by Riliwan Hassan.

He was subbed off for Mayron George with nine minutes left.

The win extends Midtjylland’s lead at the top by three points ahead of second placed Copenhagen.