By Johnny Edward:
Henry Onyekuru has dedicated the two goals he scored in Galatasaray 3-0 win at Kayserispor to the club’s manager Fatih Terim and the assistant coach Hasan Sas, reports Completesportsnigeria.com. 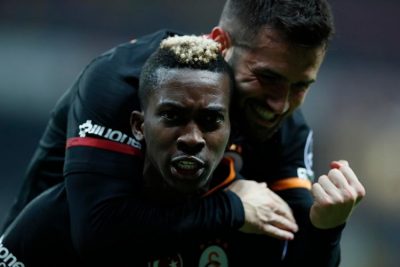 The brace took the Nigeria striker’s tally to three goals in 13 games for Galatasaray this season.

Terim and Sas were not on the bench for the encounter on Saturday after they were both banned for seven and eight games respectively by the Turkish Football Federation’s (TFF) Professional Football Discipline Board (PFDK) last Thursday for their involvement in the scuffle during a derby clash against arch-rival Fenerbahce which ended in a 2-2 draw.

Terim was also fined 65,000 Turkish Lire ($11,900) for insulting the referees and making unsportsmanlike comments after the match while Sas, a former Turkish international and ex-Galatasaray winger was fined 20,800 Turkish Lire fine for attacking a Fenerbahce player.

“It was a very important encounter for us,” Onyekuru said in his post-match interview after the game.

“Our manager and his assistant were not with us, but our supporters were here with us. We have a really good team spirit in the field today.

“We knew that we had to fight from the first minute to the 90th minute, so that we could get three points in this way. We started well, we got a nice win. I would like to dedicate this crucial win to our team, coach and supporters who couldn’t be here.”

The 21-year-old also tweeted after the game: “No better way to bounce back from the set back in the week. Great team spirit a clean sheet and two goals ⚽⚽. All Glory to God!”