Nigerian forward Henry Onyekuru is pleased with the brace he bagged for Galatasaray who came from a goal down to beat Sivasspor 4-2 in a Turkish Super Lig clash on Sunday reports Completesportsnigeria.com.

It was the second time this season that the 21 year old Everton loanee was hitting a brace for Galatasaray.

The former Anderlecht and Eupen star scored his first brace in the Turkish Super Lig clash against Kayseirspor in November. Galatasaray won the encounter 3-0.

Onyekuru scored twice against Sivasspor  in the second half to earn Galatasaray their first win from their last five games.

The brace took his tally to six in 15 league appearances this term.

“Nice to get a couple early presents before Christmas ⚽ ⚽ 🎁 and the 3 points!🎄MERRY CHRISTMAS,” Onyekuru Tweeted after the game.

Onyekuru who was adjudged the man of the match made five successful dribbles in the encounter.

Robinho gave Sivasspor the lead in the ninth minute before Eren Derdiyok equalised in the 20th minute. 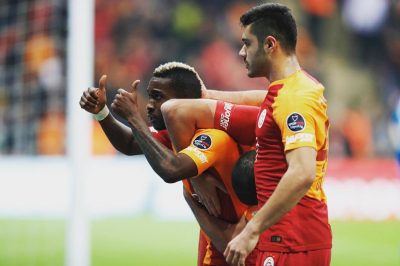 Onyekuru made it 3-2 for his side in the 51st minute before slotting home in the 69th minute to seal a home win for Galatasaray.

Galatasaray will face Boluspor next in a Turkish Cup tie on January 15.