Long-term injury absentee Manuel Neuer of Bayern Munich and Borussia Dortmund’s Marco Reus, who missed the 2014 World Cup due to injury, are included. 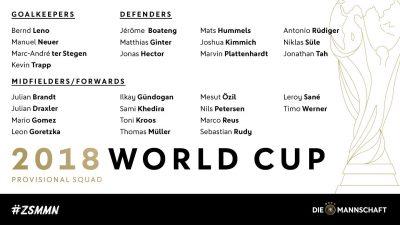 However, 2014 World Cup final goal scorer against Argentina, Mario Gotze, was left out of the provisional squad along with the injured Liverpool midfielder Emre Can.

Also, Arsenal defender Shkodran Mustafi, who was a member of the 2014 World Cup winning squad, was dropped.

Germany are drawn in Group F alongside Mexico, Sweden and South Korea at this year’s World Cup.

They will begin the defence of their title against Mexico on June 17.