The son of one of the estranged Psquare brother’s, Camron Okoye scored a superb goal at FCBescola International tournament which took place in Barcelona, Spain.

The 10-year old, was one of the players called up to participate in the competition. Proud dad Peter Okoye could not hold back his praises and admiration for his son who saw the back of the net during the tournament.

The ‘Busy body’ crooner shared the video of his son’s goal on his Instagram page, showing his excitement for his sons promising footballing career. His brilliance, skill and composure with the ball couldn’t go un-noticed as the video already has over 16k likes.

Camron controlled a through pass from his team mate, eased past the surging goalkeeper on a one on one then slotted the goal into the back of the net. You cannot deny the young lad has got it after he pulled a skillful display that awed the on looking spectators.

This comes months after the father took to social media to announce to family, friends and fans that his son Camron had crossed a big hurdle in his footballing career. He further went on to express his joy over his son’s successful trial session which qualified him to join the feeders team of FC Barcelona, Lagos. 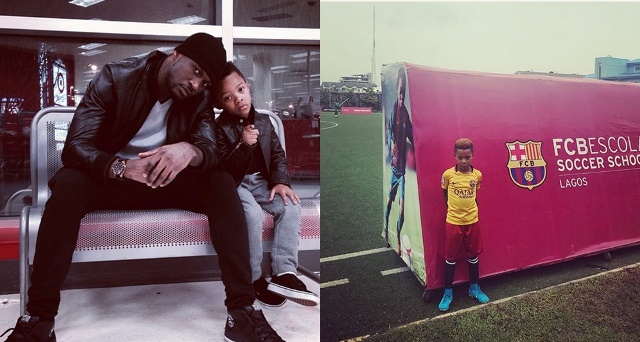