President of the Nigeria Football Federation (NFF) Amaju Pinnick has allayed fears that the federation may be facing challenges preparing the Super Eagles for the summer FIFA World Cup in Russia, saying there is no cause for alarm, Completesportsnigeria.com reports.

Speaking with the media in Abuja, on Wednesday, Pinnick said he is fully in charge of Super Eagles’ World Cup preparation and he will leave no stone unturned to ensure that Nigeria have a successful campaign in Russia

“We are not facing any challenge, and I would like to thank the government of Nigeria for creating the enabling environment for us to strive,” Pinnick said.

“The government has given us all the support and more importantly create that stability we always sought in football. The government has really done well by giving us financial support to reach our goal. I thank the Minister, who has been a major supporter of our programme. Get free genting casino promo code here

“Talking about the World Cup, I don’t we have any issue because I speak to the technical officials, especially the coaches everyday, and I am also in touch with the technical committee. I am totally in charge of the World Cup and I don’t delegate functions that are crucial because the desire of every Nigerian is for Super Eagles to do well at the World Cup. 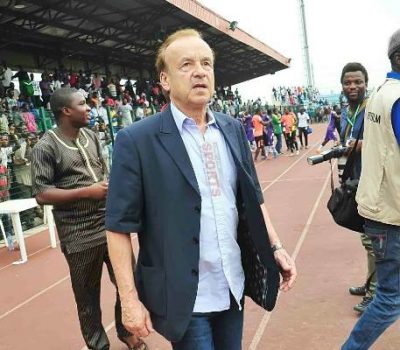 “So, I don’t think there is any challenge. We had a meeting with the team in November and we signed agreement with them that 30 percent of the FIFA money which is $2.8million will be paid to them. I am a very transparent person and every detail on bonus for each match and up to the final as well as share of income from FIFA money was agreed on.

“I am not one of the presidents of the federation that don’t talk about money and you find every detail of it. The $2.8million we agreed with the players is almost 100 percent already for them to collect whenever they come. We met a couple of State governments and even made presentation to FIFA in raising the money and I can assure that the money is 100% certain for them to collect.”

Pinnick also revealed that the NFF will shoulder the responsibility of flying the Congolese national team to and from Nigeria for the next month’s friendly match against the Super Eagles in Uyo.
“We are making an arrangement to fly in the Congolese national team because that is our responsibility. We are not going to give them any money. We would bring them here, stay for two days and take them back to their country after the match,” he explained.

“They are like 10 steps ahead of us in FIFA Ranking and we just want to humble them here and before going to England. The tickets for Nigeria/England match is almost sold out and it will a good game. The match would play at the Wembley on June 2, and from then we would go to play Czech Republic in Austria on June 6, before moving to Russia for World Cup.”

On the goalkeeping situation of the Super Eagles, Pinnick said plans are underway to dispatch goalkeeper trainers to all the national team keepers including Dele Alampasu, Ikechukwu Ezenwa, Daniel Akpeyi and the Spain-based goalkeeper Francis Uzoho for one-on-one training ahead of the World Cup.