Russia president, Vladimir Putin, has congratulated the country men’s national football team coach, Stanislav Cherchesov and his players despite their elimination from the 2018 World Cup at the hands of Croatia on Saturday night.

The hosts’ surprise run to the quarter-finals was ended by Croatia who beat them 4-3 on penalty shootout after the game ended in a 2-2 draw.

Denis Cheryshev put the hosts ahead with a stunning 20-yard strike, but they required a 115th-minute header from Mario Fernandes to take the game to spot-kicks after Andrej Kramaric and Domagoj Vida scored for Croatia.

Although Russia failed to book a semi-final encounter with England, Cherchesov claimed Putin was impressed by their display.

“Our prime minister [Dmitry Medvedev] was in our changing room. Putin called me during the day and right now. He congratulated us on a very good game,” Cherchesov told reporters after the game. 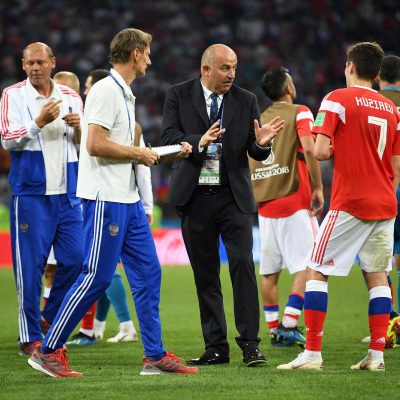 “He said that what we showed on the field was great. I told him we are disappointed. But he said we should have our eyes open and make the next steps.”