Nigeria’s Super Eagles are relishing a fascinating encounter against England today at the Wembley Stadium, in arguably their biggest Russia 2018 warm-up game.

There are interesting similarities between the two teams: both are young as a group, and the two teams have pace to burn in their ranks. So we are expecting some moments of explosiveness and sprinkles of aesthetic values on show at the 90,000 arena in London.

Indeed, 11 of the 23 members of the Three Lions have made less than 20 appearances for their national team, with only Chelsea’s Gary Cahill recording over 50 games. The quartet of Raheem Sterling, Danny Welbeck, Ashley Young and Jordan Henderson, all of whom are yet to reach 40 caps are still ahead of their World Cup captain, Harry Kane with 23. 18 of the players will be looking to make their World Cup debut.

Albeit Mikel Obi, Ahmed Musa, Ogenyi Onazi and Elderson Echiejile, have over 260 appearances between them, coach Gernot Rohr also has16 out of the 25 provisional squad members who have earned less than 20 caps each. So tomorrow’s match should serve as a dress rehearsal on how to play with personality and character at the biggest stage, as the two coaches ponder on who makes their strongest XI.

Beside these stats, the duo of Leon Balogun and William Troost-Ekong have an interesting test in central defence against the brilliant Kane who has netted an incredible 156 goals in 278 career games. The Spurs forward can combine his clever link-up play with devastating finish, and he is been doing that for the last three seasons with rising numbers. Kane drags defenders through the channels, and could create spaces for the likes of Sterling and Dele Ali-a killer in the box-to exploit behind our defence.

Victor Moses will have something to say to Shehu Abdullahi from his Chelsea experience with Ali, but the Eagles defence will need the support of their midfield enforcer Onazi and others. With Wilfred Ndidi just returning to training after injury, John Ogu may get the nod as Rohr reaffirmed Mikel’s main duty is to create for the team.

England have the pace of Musa and Moses to worry about too, and Alex Iwobi must rise to the occasion as well, in the attack.

Rohr is looking to see how new boy, Simy Nwankwo will perform as a target man, but it’s not clear if he will start ahead of Odion Ighalo who is familiar with playing against English defenders after his spell for Watford. 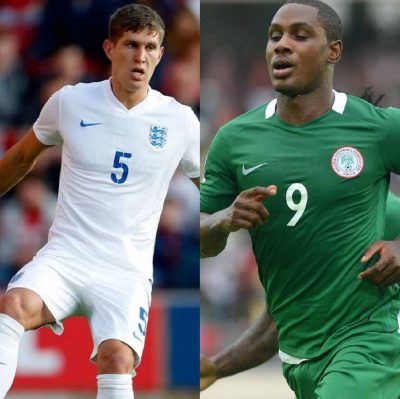 Southgate is likely to play five at the back, with two of them playing as wingbacks. So captain Mikel must lead with quick transition for Eagles to break the Lions’ wall. Brian Idowu and Shehu Abdullahi will be expected to provide the width when the Eagles go on the attack.

Rohr didn’t hide his interest in Crotone big man Simeone Nwankwo who impressed in training, but the Eagles boss will need more than his frame, considering the likes of Cahill, John Stones and Harry Maguire are familiar with his type, in the Premier League.

Musa endured a turbulent time at Leicester City. However Kelechi Iheanacho has been decent particularly in the last few weeks of the just ended season. Both players have a lot to prove today at Wembley, and in Russia.