Rohr Impressed By Quality, Attitude Of Super Eagles Vs Algeria By Dare Esan in Constantine:

Gernot Rohr has expressed satisfaction with the performance of his team in Friday’s 1-1 draw with Algeria in a dead rubber World Cup qualifier in Constantine, Completesportsnigeria.com reports.

Rohr handed debuts to Anthony Nwakaeme and Henry Onyekuru while John Ogu, Oghenekaro Etebo and Ahmed Musa also featured in the draw after a long while.

The German tactician was impressed with the zeal showed by the fringe players and admits that they can stake a claim for a place in the first team.

“We had six changes since the last game and some earned those first caps and they did well. We had quality and the same attitude,” Rohr told Completesportsnigeria.com in Constantine. 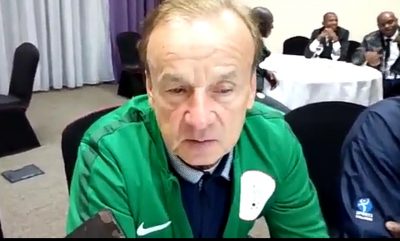 “Everybody worked well, they lost the ball and the tried to get it back. They did well which means that the building is starting now and some things are changing. We have the same attitude.

“The game showed us that we have players who can play in different positions. We were searching to find new players and we found good new players but we must wait and the return of some injured players.

“Some of these players have shown that they can come in with the first team. We saw good competition for some players in some positions.”

The draw meant the Super Eagles qualified for the Russia 2018 World Cup without losing a match in a tough qualifying group.