Super Eagles head coach Gernot Rohr has stated that the team is battle ready for Saturday’s Group D clash against Croatia at the Kaliningrad Stadium and stated he will make a final decision on the starting line-up on the eve of the game, Completesportsnigeria.com reports.

The three-time African champions will hope to start their campaign on a winning note when they confront the Vatreni here in Kaliningrad on Saturday.

“Now the team is ready. We are physically ready. We have two training sessions today (Wednesday) and we will see the players again,” Rohr stated during his interaction with the media at the team’s base in Essentuki.

“We have a full week in Russia and the players showed good commitment. Technically and tactically we have three days to work on some things.

Rohr benched Ogenyi Onazi in the team’s final build-up game against Czech Republic a week ago with Israel-based midfielder John Ogu now firm favourite to start ahead of The Trabzonspor midfielder.

The likes of Tyronne Ebuehi and Oghenekaro Etebo are also pushing for starting berths in the team having impressed in training but the German is not willing to give out any information on what his line-up will look like for the game.

“We have our team in our heart already but we will wait till the final moment before we give it out,” Rohr declared.

“This preparation gives us a possibility to see who is fit physically and who needs more time to be ready.”

The Super Eagles will come up against an experienced Croatia side with a number of quality stars like Luka Modric, Ivan Rakitic, Mario Mandzukic, Ivan Perisic and co but the German coach believes his side’s enthusiasm can help them beat the Croats.

“Croatia watched us against England and Czech Republic. The game will be a good one for both teams. It is an important game for the two teams as it is good to start with a win,” Rohr added.

“They are more experienced than us but we have young team. There is big enthusiasm in the team. You know this desire, big enthusiasm can make a team perform better.”

The former Niger Republic and Gabon coach also provided update on the injury front and delivered positive news on defender Tyronne Ebuehi who picked a nose injury during training on Tuesday.

“Yesterday, we had a little shock in camp.Tyronne Ebuehi had a nose injury. It was not a broken nose. The doctors did a good job,” Rohr stressed.

“The treatment was okay. Aside from that little injury, everyone is fit at the moment.”

He also spared a thought for the duo of Moses Simon and Carl Ikeme, two members of the team who are be in Russia due to injury and Illness.

“Before we came here, Moses Simon was injured but he is getting better now. He was not able to make the final 23,” he added.

“We have our goalkeeper Carl Ikeme who is always in our mind all the time.

“All the players here are fit. The challenge for us is to work hard without sustaining any injury. ”

The likes of Ahmed Musa, Bryan Idowu are well known to the Russian fans, while skipper of the side Mikel Obi is married to a Russian and Rohr hopes that will work in his side’s favour. 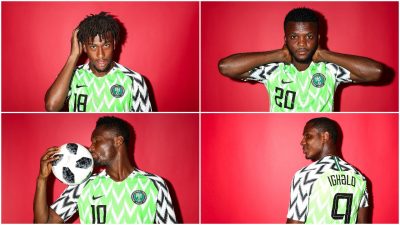 “The distance here from one city to another is very long. But our camp is nice and peaceful. There is good possibility to recover,” he revealed.

“We arrived here late in the night because of the delay we had and some of our luggage is still not here. We got here around 1am and people still came out to welcome us.

“We have some our players who have special relationship with Russia. Idowu who is Russian and Nigerian born and Musa who plays for CSKA Moscow.
Of course there is also Mikel who is married to a Russian. We hope this will help us get the sympathy of the Russian public.

“We won’t have the possibility of our fans back home coming out to support us as the distance is very far but we hope the fans can give us their support
because of these players.

“Croatia is not far from here and we expect their fans to come out in large numbers to support their team.”