Cristiano Ronaldo scored the first hat-trick of the 2018 FIFA World Cup as Portugal forced Spain to a 3-3 draw in Group B on Friday.

Diego Costa and Nacho were the scorers for Spain.

It was a game that lived up to expectations as both teams went at it with Spain edging possession while Portugal relied on fast breaks.

The draw means both Spain and Portugal are winless in their third straight World Cup opening games.

The last time Spain and Portugal won their World Cup opening games was at Germany 2006 where Spain beat Ukraine 4-0 and Portugal pipped Angola 1-0.

Ronaldo’s hat-trick was his 51st of his career and the 51st hat-trick at the FIFA World Cup.

Portugal got off to the perfect start as Ronaldo converted a fourth minute penalty, sending David De Gea the wrong way after he was fouled inside the box by Real Madrid teammate Nacho.

David Silva went close for Spain in the 10th minute but volleyed his effort inside the box just over the bar following a knock down by Diego Costa.

Spain were back on level terms in the 24th minute through Costa who twisted and turned inside the Portuguese box before shooting low into the back of the net. It was Costa’s first ever shot on target at a World Cup.

A few minutes later Isco almost put Spain ahead only to see his well struck shot hit the cross bar.

With 10 minutes remaining in the first half Andres Iniesta was unfortunate to see his low left-foot strike from a cross go inches off target.

Against the run of play, Portugal went 2-1 up through Ronaldo again whose low shot slipped through the fingers of De Gea and into the back of the net.

In the 55th minute, Spain equalised as Costa got his second of the night, bundling in Segio Busquet’s header across goal from Silva’s free-kick. 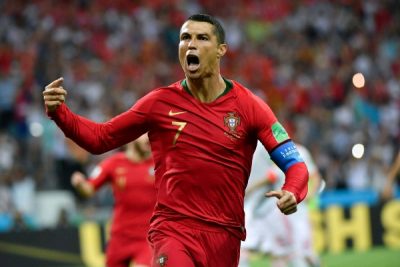 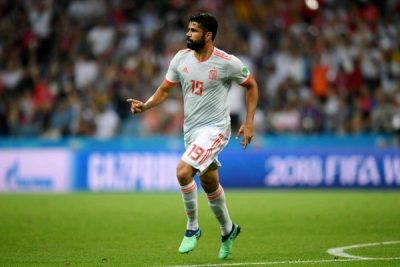 Spain went in front for the first time in the game on 58 minutes thanks to Nacho who made amends for giving away a penalty as his superb volley from the edge of the box flew into the net.

Costa almost grabbed his hat-trick in the 71st minute but failed to get a clean strike from a delightful low cross.

Ronaldo dragged Portugal back into the game to 3-3 in the 88th minute as he curled in a brilliant free-kick over the Spanish wall with De Gea left stranded.

In the 92nd minute, Ronaldo almost grabbed the winner but his header from a cross went just wide.