Super Eagles winger Victor Moses made his fifth English Premier League (EPL) start of the season for Chelsea who outclassed Stoke City 4-0 at the bet365 stadium on Saturday, Completesportsnigeria.com reports.

At the Liberty Stadium, Tammy Abraham’s goal was not enough for Swansea who lost 2-1 to Isaac Success’ Watford. Success was an unused substitute in the encounter.

Wilfred Ndidi made his sixth straight start for Leicester City who lost 3-2 to Liverpool. His compatriot Kelechi Iheanacho came on in the 74th minute but could not salvage a point for the Foxes.

Ahmed Musa was not listed for the encounter. The former CSKA Moscow star is yet to feature for Leicester this season in the EPL.

In the English Championship, Hope Akpan was introduced in the 75th minute for Jay Allen in Burton Albion’s goalless draw away to Queens Park Rangers.

In another Championship fixture, Sone Aluko provided an 87th minute assist for Jon Boedvarsson to earn Reading a share of the spoils in their 1-1 draw against Hull City. It was his fourth game since he joined the club. Nigeria defender Ola Aina, who is on loan from Chelsea, was in action for all 90 minutes for Hull.

In Italy, Sadiq Umar watched from the substitutes bench as Torino lost 4-0 to Juventus in the Turin derby on Saturday. Umar is yet to play this season while his compatriot Joel Obi was missing due to injury.

In Spain, Kayode Olanrewaju failed to get on the score sheet in his fifth Spanish La Liga Santander appearance for Girona who lost 3-0 to Barcelona at the Montilivi stadium. 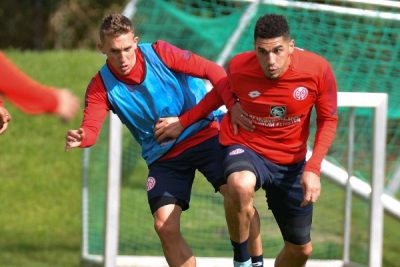 Leon Balogun in Training for Mainz

In the German Bundesliga, Leon Balogun was benched in Mainz 1-1 at home to Hertha Berlin. Balogun has made four starts this season for Mainz.

In Holland, Tyrone Ebuehi was on the winning side with ADO Den Haag who edged Sparta Rotterdam 1-0.

In the Belgian Jupiler League, Henry Onyekuru was not listed for Anderlecht who beat Waasland Beveren 2-1. Onyekuru has scored four goals in seven appearances in all competitions for Anderlecht.

In the Scottish League, Efe Ambrose led Hibernian to a 1-0 win over Ross County.