ROUND UP: Kalu, Akinyemi On Target; Aremu Makes Assist Super Eagles winger Samuel Kalu scored his first French Ligue 1 goal of the season for Girondins Bordeaux who were held to a 3-3 draw at home to Olympique Nimes on Sunday reports Completesportsnigeria.com.

Kalu finished off a brilliant pass from Sergi Palencia in the 57th minute to hand his side a 3-2 lead but Umut Bozok drew Nimes level in the 77th minute which earned the newly promoted side a point from the encounter. 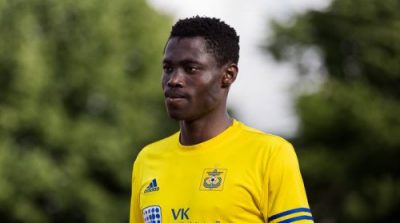 The 21 year old has played four Ligue 1 games since he joined the club from Belgian side, Gent in the summer.

In Norway, Adeleke Akinyemi scored his first league goal of the season for IK Start who trounced Lillestrom 3-0.

Akinyemi finished off a brilliant pass from his compatriot, Afeez Aremu fifth minute of the encounter.

The 20 year old has made four appearances for IK Start while Aremu has made 20 starts this season for IK Start.

Akiyemi was replaced in the 74th minute by Mathias Bringaker. Aremu featured for the entire duration of the game.

In the Italian Serie A, Orji Okonkwo played all 90 minutes for for Bologna in their 1-0 loss to Genoa on Sunday.

In the German Bundesliga 2, Jamilu Collins made his seventh appearance for Paderborn in their 5-2 thrashing of FC Cologne on Sunday.

Azeez Ramon was an unused substitute for Lugo who lost 2-0 at home to Real Oviedo. Azeez has made two appearances since the start of the season.