Ogenyi Onazi opened scoring for Trabzonspor firing in a rebound shot in the third minute after Hugo Rodallega’s shot was deflected to his path.

It was Onazi’s first goal in six months. The 25 year old last scored in Trabzonspor’s 4-1 win over Yeni Matalayaspor in March.
The goal was also his first league goal in four appearances for Trabzonspor this season and

Nwakaeme doubled the lead in the 25th minute finishing off a great play from Yusuf Yazici. The one cap Nigeria international made it 3-0 in additional time of the first half before Caleb Ekuban sealed the win in the 90th minute. 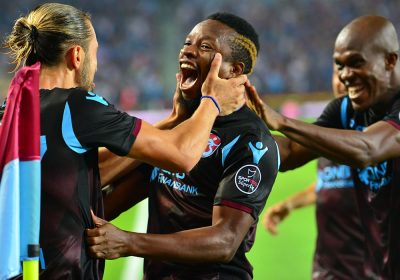 Galatasaray’s Onyekuru was subbed off on 81 minutes for Sofiane Feghouli, just as Onazi was replaced by Juraj Kucka in the 74th minute for Trabzonspor due to an injury he sustained.

In England, Oghenekaro Etebo played for 81 minutes in his sixth appearance for Stoke City who lost 2-1 to West Brom in the English Championship on Saturday.
Etebo was subbed off for Bojan Krikic in his third start.

Sone Aluko played for an hour before he was replaced for Marc McNulty as Reading lost 2-1 at home to Sheffield Wednesday.

Victor Moses was left out of Chelsea’s squad that defeated Bournemouth 2-0. The 27 year old former Nigeria international has made one substitute appearance for the Blues this season.

At the Amex Stadium, Leon Balogun watched from the bench as Brighton drew 2-2 with Fulham.

Ramon Azeez was also not included in Lugo’s matchday squad that defeated Numancia 3-2 in a five goal thriller. The 2014 FIFA World Cup player has made only one substitute appearance this season for Lugo.

In Germany, Anthony Ujah was not included in Mainz’s 1-1 draw away at Nuremberg on Saturday. Ujah has made one substitute appearances in the Bundesliga wherein he scored a goal this term.

In the Belgian Pro league division, Victor Osimhen made his debut for Sporting Charleroi who defeated Royal Excel Mouscron 3-1. The former Nigeria U-17, U-20 and U-23 striker came on for Jeremy Pervert in the 78th minute of the win.

In the Scottish topvflight division, Efe Ambrose played all 90 minutes in Hibernian’s 2-1 away loss to Livingston. It was his fourth game of the SPL season.

Stephen Odey featured the entire duration of FC Zurich’s 1-0 loss to Lugano who benched Stanley Amuzie for the encounter.

Odey has scored once in five Swiss League games.