Nigerian trio Moses Simon, Anderson Esiti and Samuel Kalu were all in action for Gent who kicked off their Belgian Championship play-offs campaign with a 2-0 away win against Anderlecht on Sunday.

The winner of the play-offs will be crowned league champions and gain qualification to next season’s UEFA Champions League.

Second-half goals from Brecht Dejaegere and Yuya Kubo in the 47th and 86th minutes secured Gent all three points.

Simon was replaced in the 72nd minute while Esiti and Kalu played 90 minutes.

The other two teams in the play-offs are Club Brugge and Genk who will meet on Monday. 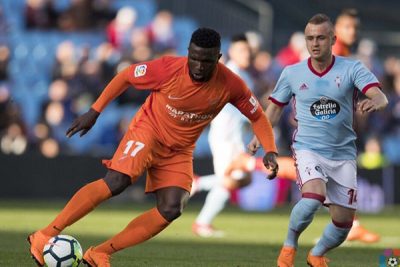 Success was replaced in the 66th minute while his Nigerian teammate Brown Ideye was not in Malaga’s matchday squad for the game.

Gonzalo Castro was the hero as he scored a 37th minute penalty to give Malaga their first league win since December when they beat Real Sociedad 2-0 away.

Before the game against Villareal, Malaga had gone 13 straight league games without a win (10 defeats, three draws).

Malaga remain bottom on 17 points in the league table.

And in the German Bundesliga, Super Eagles defender Leon Balogun was benched for Mainz who were held to a 0-0 home draw by Monchengladbach.

Anthony Ujah was introduced for Mainz in the 90th minute of the game.

The draw means Mainz are winless in their last five league games (three draws, two defeats), are 16th in the relegation play-offs spot on 26 points.