By Johnny Edward:
Super Eagles fringe forward, Anthony Nwakaeme made his debut for Trabzonspor who played a 2-2 draw with MKE Ankaragucu in the Turkish Super Lig on Saturday coming on in the 72nd minute of the encounter, Completesportsnigeria.com reports.

Nwakaeme came on for Abdülkadir Omur in his first appearance for his new team. His compatriot Ogenyi Onazi who has been called up to the Super Eagles for next month’s AFCON qualifier against Seychelles played the entire duration of game. 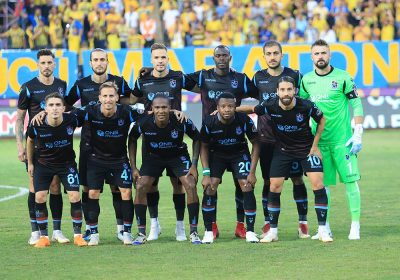 Also in Turkey, Lanre Kehinde also came on for Ankaragucu for the last six minutes of the game.

Newly invited Super Eagles left-back, Jamiu Collins was in action for SC Paderborn 07 who drew 2-2 with home side Greuther Fuerth in the German Bundesliga 2 clash at the Ronhof Thomas Sommer Stadium in Germany.

Collins played the entire duration of game. It was the 24 year old’s third appearance this season in the Bundesliga 2.

Another Super Eagles new call-up for the forthcoming 2019 AFCON qualifying against Seychelles, Kelechi Nwakali made another appearance for FC Porto B who lost 2-0 to Penafiel in the Portuguese Super second division clash on Saturday.

It was his third appearance for the club since he joined on a season loan deal in the summer from Arsenal.

In Belgium, Imoh Ezekiel came on for Van Der Bruggen to bag his debut with three minutes left to play in Kortrijk’s 2-0 win at Sporting Charleroi who did not list Victor Osimhen for the encounter.

Uche Agbo was an unused substitute in Standard Liege’s 3-2 win at St Truiden. Agbo has made four league appearances for Standard Liege.
In England, Alex Iwobi made his second start of the season for Arsenal who recorded their first win of the season defeating West Ham 3-1 at the Emirates Stadium on Saturday.

The Nigeria international who was also making his 100th senior appearance for the Gunners was replaced at half time for Alexander Lacazatte.

Kelechi Iheanacho returned to Leicester City’s starting line-up on Saturday as the Foxes came from a goal down to beat Southampton 2-1 at the Saint Mary’s Stadium. He played for 67 minutes before he was subbed off for Marc Albrighton.

His compatriot, Wilfred Ndidi played the entire duration of the game. It was his third start of the campaign.

Leon Balogun was yellow carded on the hour mark in first start for Brighton & Hove Albion in Saturday’s 1-0 loss to Liverpool. The game was his second appearance in the EPL.

In the English Football League Championship, Oghenekaro Etebo made his fifth appearance of the season for Stoke City who defeated Hull City 2-0 to record their first win of the season on Saturday.

In the Scottish topflight division, Efe Ambrose played all 90 minutes for Hibernian who were held to a 1-1 draw by Aberdeen.