By Johnny Edward:
Super Eagles forward, Henry Onyekuru scored his second goal of the season for Galatasaray SK in Monday’s 6-0 home win over Alanyaspor in a Turkish Super Lig game at the Telekom Stadium, reports Completesportsnigeria.com.

A brace from Emre Akbaba and other strikes from Fernando, Sinan Gumus, Eren Derdiyok and Onyekuru secured Galatasaray SK their third win of the season.

Onyekuru who scored on his league debut against Goztepe a fortnight ago made it 5-0 in the 82nd minute of the win.

The 21 year old forward has been called up for Nigeria’s 2019 Africa Cup Of Nations qualifier against Seychelles next month. 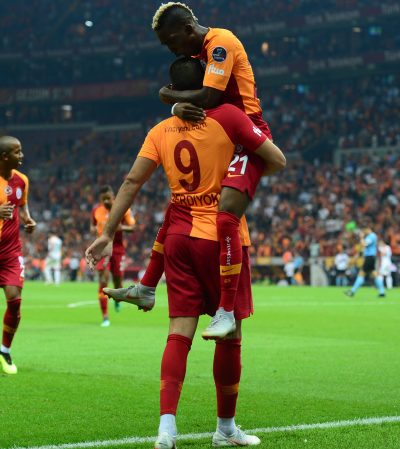 Moses Simon was missing in action for Levante who suffered their first defeat of the Spanish La Liga season – a 2-1 loss at home to Celta Vigo at the Ciutat de Valencia Stadium on Monday.

Simon who joined the Spanish club this summer from KAA Gent is yet to feature for the club after two games. He is still recuperating from injury.

In Norway, Aremu Afeez missed out on action in IK Start’s 1-0 home loss to Odds Ballklubb due to suspension.