Kante trained separately from his team-mates on Monday alongside right-back Benjamin Pavard at Krestovsky Stadium, but coach Deschamps is confident the Chelsea man will be available to shackle the Red Devils’ attacking stars from defensive midfield. 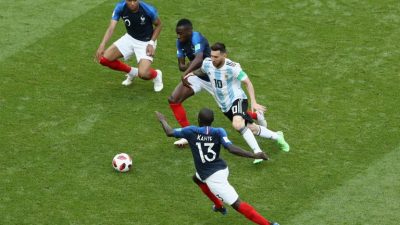 “Yes, he will have a role. He has a role in every match with some adjustments compared to what he’s done before,” Deschamps said during pre-match conference.

“I want him to be as efficient as possible for our team.”

“Of course, N’Golo is an essential part because of all the balls he gets back and his positions. He also has a lot of trajectories on offensive passing.”

“He will have an important role to play as he did in every match against players like Lionel Messi in the round of 16. He had a very precise role. It is true that we didn’t really see much of Lionel Messi when he played against us.”

“We will be ready and will adapt ourselves to Belgium’s organisation, whatever it is, due to Thomas Meunier’s absence. Belgium are not here by chance. I prepared my players for different possibilities and it’s not linked to Belgium. I work on it whoever we play.”

Deschamps also revealed that he was pleased to see his former teammate Thierry Henry do well as an assistant manager with Belgium.

“I’m pleased for him, he’s someone I really appreciate. We played together as team-mates and he was much younger and I was at the end of my career.”

“It’s a difficult situation and it does happen sometimes. This time he is going to be on the bench against his home nation but he did know that from the time he was joining the management team and becoming assistant to Martinez that that could happen. But on the personal front it is with great pleasure that I’m going to see him tomorrow.”