Russia 2018: Musa’s Strike Vs Iceland, 17 Others Nominated For Goal Of The Tournament Ahmed Musa’s second goal for the Super Eagles in their 2-0 win over Iceland at the 2018 FIFA World Cup in Russia has been nominated to view for the best goal of the tournament, reports Completesportsnigeria.com.

Musa bagged a brace in the encounter to hand Nigeria’s Super Eagles their only win at the tournament.

The Leicester City forward’s strike will contend with 17 other goals scored at the tournament in a poll conducted by FIFA.

Other goals nominated for the goal of the tournament award include, Cristiano Ronaldo’s third goal against Spain,Nacho’s strike against Portugal, Philipe Coutinho long range strike against Switzerland.

Others are goals from Denis Cheryshev against Saudi Arabia and Croatia, Lionel Messi’s strike against Nigeria, Nacer Chadli additional time goal for Belgium against Japan.

Benjamin Pavard’s half volley in France 4-3 win over Argentina, Ricardo Quaresma’s goal for Portugal against Iran, Adnan Januzaj’s curler against England, Angel Di Maria’s goal in Argentina’s defeat to France also were nominated for the goal of the tournament. 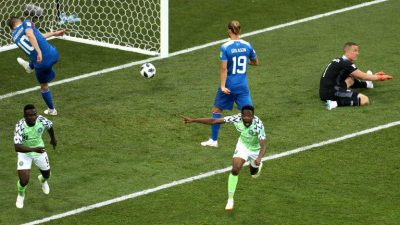 Jesse Lingard’s stunner against Panama, Toni Kroos stoppage time goal against Sweden, Luka Modric’s goal in Croatia’s win over Argentina, Artem Dzyuba’s close range strike for Russia in the win over Egypt, Juan Quintero’s strike for Colombia against Japan and Dries Mertens volley against Panama all made the shortlist of goals nominated.

Voting will will continue on the official website of FIFA until Monday 23 July, according to the World football governing body.