“The fire was merely an accident” read one tweet from the national team’s verified account while another said the team was “heading to their residence safely.”

Video circulating on social media showed what appeared to be a fire on the wing of an aircraft.

A series of follow -p posts showed Saudi players calmly disembarking the plane and then later arriving at a hotel in Rostov-on-Don. 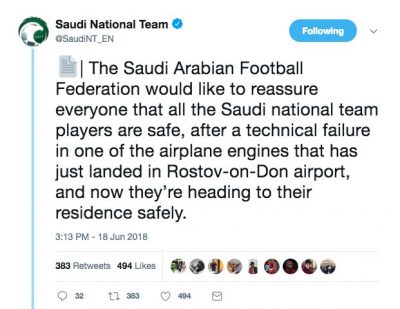 The plane was was provided by the the International Air Transport Association (IATA) organizational committee for the teams participating in the World Cup, the Saudi Football Federation later said in a statement posted to Twitter.

Saudi Arabia plays Uruguay in the city on Wednesday after suffering a 5-0 loss to hosts Russia in the opening game of the tournament.