Super Eagles of Nigeria were beaten by dominant Croatia 2-0 in their opening Group D game at the 2018 FIFA World Cup on Saturday.

Croatia profited from two gifts from the Super Eagles to claim the crucial win and go top of Group D.

A goal in each half, first an own goal by Oghenekaro Etebo and a penalty coolly converted by Luka Modric gave Croatia their first opening group game win since France 1998.

Croatia now top the group on three points which Argentina and Iceland are joint-second on one point each with the Super Eagles bottom.

Croatia had the first real chance on 14 minutes through Ivan Perisic whose volley went just over the bar after good interchange of passes.

Croatia’s pressure from set-pieces on paid 32 minutes as Mario Mandzukic’s header from Luka Modric corner came off Etebo and rolled into the net. 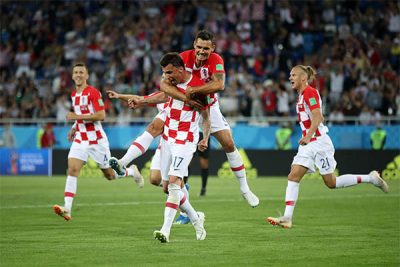 Minutes later Alex Iwobi smashed a low shot from the edge of Croatia’s box but his effort was blocked by Dejan Lovren.

The Super Eagles had their first shot on target in the 60th minute but Ighalo’s header from Bryan Idowu’s cross did not disturb the Croatia keeper.

Croatia went 2-0 up on 71 minutes through Modric who converted from the penalty spot after William Troost-Ekong needlessly grappled with Mandzukic inside the box.

In the 79th minute, Croatia almost extended their lead but Francis Uzoho saved the Super Eagles blushes as he palmed away a dangerous cross.

Croatia should have extended their lead late in the game but Uzoho did well enough to stop Mateo Kovacic who was clean through on goal.