France will compete in their third FIFA World final in 20 years after edging out  Belgium 1-0  in their semi-final clash at the Krestovsky Stadium, St Petersburg on Tuesdayevening.

Barcelona centre-back Samuel Umtiti scored the decisive goal with a header six minutes after the break.

Both teams have chances to take the lead in the first half but were let down by poor finishing and great goalkeeping by Thibaut Courtois and Hugo Lloris.

Hazard, who was the star performer for Belgium in the first half  twice came  close to getting a goal with his efforts sailing over the bar, while  Lloris produced a stunning  save to deny Toby  Alderweireld. 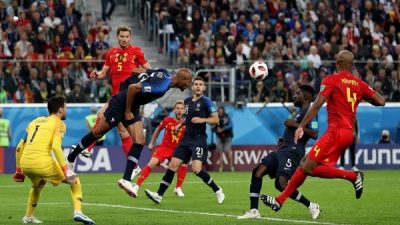 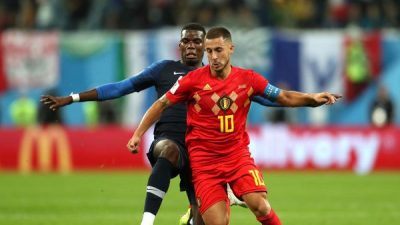 Olivier Giroud on the other hand fluffed his lines with his  finish after he was set up by Antoine Griezmann, while Pavard was denied by a big save by Courtois.

The winning goal arrived in the 51st minute with  Umtiti nodding the ball home at the near post from a corner-kick.

Didier Deschamps men  held on to the lead for the remainder of the game and will now face the winner of the second semi-final between Croatia and England in the final on Sunday.