Russia 2018: VAR To Be Used To Punish Players For Off-The-Ball Incidents Football’s rule-making body the International Football Association Board (IFAB) has said that referees at the 2018 World Cup finals will be able to give red cards for off-the-ball incidents spotted by the Video Assistant Referee (VAR).

VAR will be used for the first time at the 2018 FIFA World Cup in Russia. And IFAB confirmed that players can receive retrospective red cards during matches in the tournament.

IFAB Technical Director, David Elleray, told The Times: “If there is something away from the action that has been missed and it later comes to the attention of the VAR or the assistant VAR, then they can inform the referee and he can send the player off, even if it is later in the match.

“We do not anticipate this happening very often… this would only be for serious red-card offences.”

A live trial of the VAR system began in August 2016 with a United Soccer League match between two Major League Soccer reserve sides. 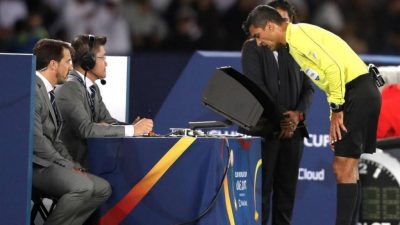 Match referee Ismail Elfath reviewed two fouls during the match, and after consultation with video assistant referee Allen Chapman , decided to issue a red card and a yellow card in the respective incidents.

Video reviews were introduced the following month during an international friendly between France and Italy .

A “pitchside monitor” was introduced at the 2016 FIFA Club World Cup, allowing referees to review footage from the field.