France are through to the semi-finals of the 2018 FIFA World Cup in Russia after edging Uruguay 2-0 in their quarter-final  encounter at the Nizhny Novgorod Stadium on Friday.

Uruguay forward Edison Cavani missed the game due to the calf injury he picked up his side’s 2-1 second round win against Portugal.

It was the first time Cavani and his strike partner Luis Suarez didn’t start in a competitive game for the South Americans since the 4-1 defeat against Brazil in March 2017.

Les Blues took the lead four minutes before the break with their first effort on target courtesy of a superb header from Rapheal Varane. 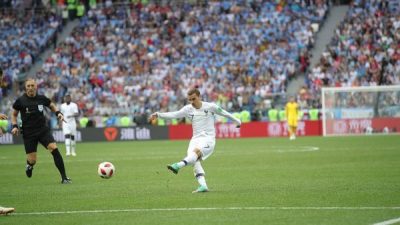 The centre-back got the slightest of touches to Antoine Griezmann’s free kick with his header hitting the far corner.

Griezmann got France’s second goal of the game a minute after the half hour mark following a howler by Uruguay goalkeeper Fernando Muslera.

Muslera who has kept three clean sheets in four games in the competition and made 10 saves in the process failed to deal with Griezmann’s 25-yard drive which went through his hand and over the line.

France will face the winner of the game between Brazil and Belgium in the semi-final.