Sampaoli Made Redundant; Messi, Others To Select Argentina Vs Super Eagles Argentina face a further tough battle to revive their fading hopes of becoming champions at the 2018 FIFA World Cup in Russia after reports emerged on Saturday
night that Jorge Sampaoli would stay on as coach but will be stripped of effective power before Tuesday night’s vital fixture with Nigeria.

La Albiceleste face early elimination from the competition after picking just one point from their opening two games, a 1-1 draw with Iceland and 3-0 loss to Croatia.

Senior players according to a report in the Daily Mail are said to have made their grievances known to Argentina Football Association general manager, Jorge Burruchaga.

Argentina 1986 World Cup winner Ricardo Giusti has also claimed that he has spoken to Burruchaga, who has admitted that the players would be consulted for the Nigeria game. 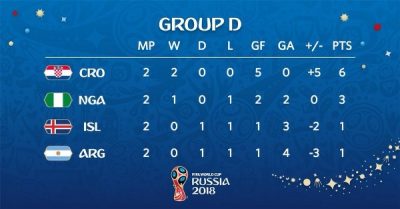 “The players will decide the team, that’s a fact. If Sampaoli wants to sit in the bench, he can do it. If not, no problem,” Giusti was quoted by the Daily Mail.

Sampaoli was reported to be in talks with Argentine FA president Claudio Tapia late on Saturday night but looked like keeping his job, though having to take account of the players’ concerns.

Messi and Javier Mascherano, as the senior players, would be most likely to be consulted to revive the campaign, with Argentina needing a win over Nigeria to take second place in the group, assuming that Iceland do not beat Croatia and better Argentina’s goal difference.

Argentina are fourth in Group D, two points adrift of second, and need a win against Nigeria to stand any chance of progressing.

A win for the Super Eagles will guarantee progress while a draw will be enough depending if Iceland fail to beat Croatia.