Sanchez Denies Claims That He Moved To Manchester United For Money Alexis Sanchez has denied that his proposed move to Manchester United is fueled by money by retweeting an article defending his imminent switch.

The Chile forward’s transfer to Old Trafford is expected to be completed soon, with Sanchez posting a video on Instagram on Sunday showing him boarding a private plane ahead of a reported medical.

Many have criticised Sanchez, whose salary is set to increase markedly at United, with former Arsenal defender Martin Keown labelling the former Barca forward as “the biggest mercenary in football”.

However, British journalist Oliver Holt defended United’s decision to spend big, stating in a Daily Mail article that it is the nature of the market, while also claiming that Sanchez – who was previously a target for Manchester City – will also be taking a step up in his career. 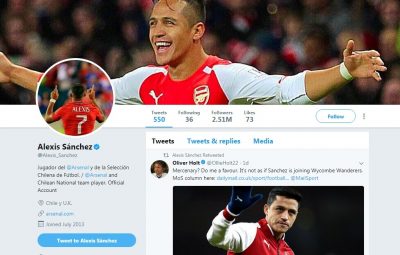 Sanchez retweeted the link to the article on Sunday, the first activity from his official Twitter account since January 7.

Both United boss Jose Mourinho and Gunners counterpart Arsene Wenger revealed the move is close to being completed following respective wins over Burnley and Crystal Palace on Saturday.

Arsenal Star Lands In Manchester, Set For United Medical
How To Migrate To Canada Without IELTS - A must read for anyone looking for a better life abroad".... Copyright © 2020 Completesports.com All rights reserved. The information contained in Completesports.com may not be published, broadcast, rewritten, or redistributed without the prior written authority of Completesports.com.
Share