Chelsea manager, Maurizio Sarri, has admitted that the Blues’ 3-0 win over Huddersfield Town in Saturday’s English Premier League clash was not a true reflection of how difficult the game was at the John Smith’s Stadium, reports Completesportsnigeria.com

Goals from N’Golo Kante, Jorginho and Pedro Rodriguez gave Maurizio Sarri a bright start to his era at Chelsea

“The game was more difficult than the result. If you see the result you think it was a very easy match but in the first half it was very difficult against physical opponents,” Sarri told the BBC after the game.

“We are not a physical team so for 20 minutes we were in trouble but we did very well.”

“In this moment we are not at the top of our potential but we had the capacity to suffer for 20 minutes in the first half.” 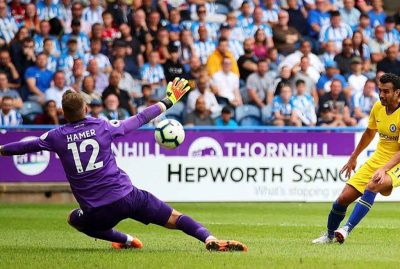 On how long it will take to reach their potential as a team, Sarri added: “It depends on me and the players. I don’t know.

“The situation until now has been very difficult. On Monday four players from the World Cup arrived. And then on Tuesday another two, so it’s not been easy for me at the moment. Hopefully, two months and not three.”