Chelsea manager Maurizio Sarri is surprised by the reaction of the team after they slumped to a 1-0 defeat at home to Leicester City at Stamford Bridge on Saturday.

A Jamie Vardy goal shortly after half-time did the damage as Chelsea were left to rue chances to score in each half which hit the woodwork.

Chelsea stay ahead of Arsenal in fourth place on goal difference. 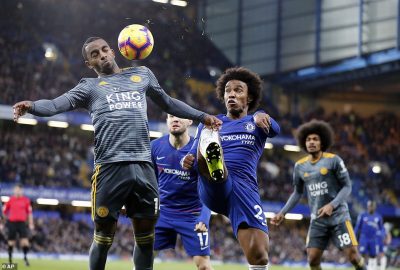 “After the goal the reaction was, for me, a strange reaction, not in the right direction, not as a team but as 11 different players and so it was very strange.”

“I think we could have done better in the reaction. We only had to continue to play as in the first part of the match, there was time to score without a reaction as a team shocked, as a team in mental confusion.’

“I don’t know. If I knew I would have solved the problem before this match. It’s difficult to understand because we have players with lots of experience.”

On his choice of substitution, Sarri said: “I wanted only to be more present, also physically in the other box, but apart from the subs the reaction wasn’t in the right way. If the reaction is like this you can change 11 players, it’s the same.”

Sarri also explained his choice of deploying Eden Hazard as a central striker for the third Premier League game in a row.

“I was really very happy at the end of the first half because we played very well, we were dangerous, we conceded nothing to the opponents, so I was very happy with the team and our deployment of Hazard as a striker. After the goal his position wasn’t important.”