Maurizio Sarri expects a tough clash when Chelsea comes up against Wolverhampton Wanderers at the Molineux Stadium in English Premier League on Wednesday.

Chelsea bounced back to winning ways in the EPL on Sunday with a 2-0 win over Fulham at Stamford Bridge and will be aiming to make it two wins in a row when they travel West Midlands to face Wolves who lost 2-1 away to Cardiff City in their last game.

“I expect a very difficult match. They have technical players, they were unlucky in the last two matches, but it is not easy to play there,” Sarri revealed during his pre-match interview on Tuesday ahead of Chelsea’s Premier League clash with Wolves.

The Italian manager also ruled out an exit for Ruben Loftus-Cheek when the January’s transfer window reopens.

Loftus-Cheek who scored in Sunday’s win over Fulham has been linked with numerous clubs but Sarri dismissed the idea of a move.

He also revealed that Mateo Kovacic and Marcos Alonso are doubtful for the game.

Kovacic is nursing an ankle injury while Alonso is battling a back injury but Sarri does not believe the Spaniard can use his injury as an excuse for a below-par performance against Fulham.

“Kovacic, ankle. Alonso, back. I don’t know (if it made a difference to his performance). I don’t think you can say that after the match.”

“Maybe during the match the back worsened.” This is possible, I don’t know.”

“I want to speak to him. He didn’t play very well. I know very well this, but I think Alonso knows very well this. It can happen. Today we will see the reaction.”

He was also pleased with the new deal Cesar Azpilicueta signed at the club on Tuesday but hopes that David Luiz and Cesc Fabregas will also extend their stay at the club.

Azpilicueta penned a new four-year contract and was asked about the future of David Luiz and Cesc Fabregas, who are both out of contract at the end of the season. 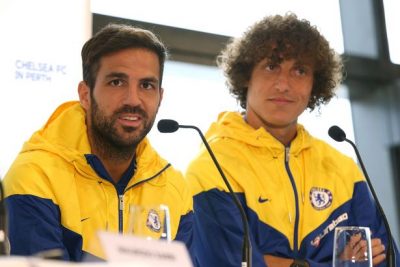 “David and Cesc are leaders, and so I think it’s very important for me, for the staff, also for their team-mates, if they stay with us,” said Sarri.

“The club wants a short contract and the players want a long contract. And so it’s difficult for this reason. I think at the end we can find a solution.”

“He is important for the club, staff, and team-mates. I am very happy with the contract.”

“I spoke with the club about this one month ago. I know very well it is not easy, but I think we can do a new deal for both.”