Completesportsnigeria.com’s NURUDEEN OBALOLA, who has just returned after one full week in Yaounde where he covered the Super Eagles versus the Indomitable Lions World Cup qualifier, presents the key takeaways from the Monday night clash at the Stade Omnisport Ahmadou Ahidjo, some of them beyond the action on the pitch…

Cameroon Fans In Love/Hate Relationship With Their Lions

In the one week that Completesportsnigeria.com spent in Yaounde, the fans loved, then hated, then loved their team all over again.

Prior to Friday’s first meeting against Nigeria in Uyo, the fans could not stop boasting about how great their team was, reeling out names of their players who would punish the Super Eagles.
They clearly idolised Christian Bassogog, Vincent Aboubakar, Fabrice Ondoa and the entire squad and they expected victory over Nigeria.

But the praises turned into curses after the 4-0 defeat in Uyo on Friday. Suddenly, the team was rubbish and there was no point watching them. Most of the fans Completesportsnigeria.com spoke with were mostly hurt that it was Nigeria that disgraced their team. Some said they could have stomached it if it was another team, not Nigeria.

While many who vowed not to turn up for Monday’s reverse fixture made good their promise as the 40,000-capacity Stade Omnisport Ahmadou Ahidjo was not filled to capacity, there was still a sizable crowd, numbering at least 35,000.

And those fans at the stadium showed their love for their team, moaning at every Nigeria move and screaming as the Lions roared into life after going down to Nigeria. The crowd cheered at the beginning, booed the Lions at half time, and then raised the roof as their team equalised and threatened to bag a winner. By the end of the emotional rollercoaster, it was clear that Cameroonians love their Lions. They just can’t take it when the Lions are tamed.

It took him a few years, but Mikel Obi has finally underlined his ultra-importance to the Super Eagles.

After years of frustrating performances from the former Chelsea midfielder, the 30-year-old has in recent years emerged as one of the Super Eagles’ most valuable players.

For two years or so now, the Super Eagles do not function optimally without Mikel and the two matches against Cameroon, especially Monday’s second leg in Yaounde, have shown he is almost indispensable.

In Uyo, Mikel who just returned from a long lay-off was the soul of the team, running the midfield like his personal fiefdom as the Lions chased shadows. His composure, and short and long passing, steadied the Eagles when the visitors were dominant early on.

He helped establish Nigeria’s control and then played the pivot as the Nigerians launched breakaways.

His importance was even more obvious in Yaounde as the team fell apart upon his removal. The 25 minutes the Super Eagles played after Mikel Agu replaced the captain were pure torture for Nigerian fans at the Stade Omnisport Ahmadou Ahidjo on Monday. The Eagles lost all control and struggled to keep the ball for more than a few seconds as Cameroon threatened to run riot. Mikel’s leadership was sorely missed.

Those last 25 minutes without Mikel brought back memories of the headless chicken performance of the Eagles when they lost 2-0 to South Africa in Uyo in June.

This will sound like free public relations for Cameroon but it is reality. They demonstrated with the organisation of the Indomitable Lions versus Super Eagles match that they deserve to be allowed to host the 2019 Africa Cup of Nations.

If what the Cameroonians put together at the Stade Omnisport Ahmadou Ahidjo could be replicated at the other proposed venues, they will host a near-perfect AFCON.

The stadium was in superb condition before, during and after the match. The crowd control was exemplary. The pitch looked so good when Completesportsnigeria.com saw it before the match that this reporter had to pull out a few blades of grass to confirm it was not synthetic.

The security was tight but unobtrusive, with the highly respected gendarmerie working with the police but not harassing anyone. The stadium’s media centre and press tribune are better and bigger that what most of the biggest stadiums in Africa have. And then the WiFi is flawless. Completesportsnigeria.com did over three hours of live updates with the stadium’s WiFi with absolutely no hitches.

The FECAFOOT media team, led by the amiable Jean Jacques Mouandjo were courteous, friendly and conducted the accreditation of the over 250 journalists who covered the match brilliantly.

Super Eagles Must Learn To Cope With Pressure

The Super Eagles rode Cameroon’s early wave of pressure on Monday night in Yaounde without buckling and then deservedly took the lead.

But when the tide turned and the Lions piled it on with the vociferous support of 35,000 fans driving them on, the Nigerians wilted and were lucky to survive with a point.

There were hair-raising moment after hair-raising moment for Nigerian fans as the Lions poured forward and pinned the Super Eagles back to their own half. Of course, the exit of the tired Mikel Obi was a factor, but even without his leadership the team should have had enough to hold themselves together.

The Eagles are on the verge of qualifying for the World Cup where they will face some real pressure from some of the best players and teams in the world. They must learn how to manage the game and not lose their confidence and composure on the big stage.

Gambian referee Papa Gassama has often been described as Africa’s best. He demonstrated why on Monday. He might not have got all the calls right – no referee does – but Gassama acquitted himself excellently.

The Cameroonian fans constantly bayed for blood, screaming for yellow cards, red cards, penalties and all kinds of punishment for the Super Eagles, but Gassama refused to give any significant ‘hometown decision’. He ignored the crowd and did his job.

He gave the Lions a deserved penalty which Vincent Aboubakar scored, and denied them another one when he felt there was no justification.

The no-penalty call was the subject of a mild argument after the match, but everyone agreed it was not clearcut as the replay of the incident was not shown on the stadium’s screen.

If a referee is not certain about a penalty decision, he should never give one. Most referees would have caved in to relentless pressure from the home fans, but Gassama stood his ground and did an admirable job.

What Gassama did took courage and he did it without any fuss.

Ezenwa Has Seized His Chance

Ikechukwu Ezenwa has grabbed his great opportunity with both hands (pun intended).

The FC IfeanyiUbah goalkeeper was supposed to be the new Chigozie Agbim, the token home-based goalkeeper who just trains with the main Super Eagles while remaining the first-choice for the home-based selection.

But the 29-year-old Ezenwa has proven he is good enough to step in when he is needed. Which is exactly what he did when first choice Carl Ikeme and second choice Daniel Akpeyi became unavailable.

Ezenwa was not really tested in Uyo on Friday but he exhibited confidence and his celebration after the goals endeared him to the fans.

He had his wobbly moments against Cameroon in Yaounde on Monday, but he did make some crucial saves as Cameroon went all out for the winner.

Ezenwa might not be at Vincent Enyeama or Ikeme’s level yet, but he has certainly overtaken Akpeyi in the goalkeeping hierarchy. Nobody will raise an eyebrow if Ezenwa is named in goal for the next World Cup qualifier against Zambia in October.

And he justifiably earned his coach Gernot Rohr’s praise.

You had to see it to believe it. Cameroonians are huge fans of Mikel Obi. Yaounde people forgot about the fierce football rivalry between their country and Nigeria and showed pure love to the Super Eagles captain.

From Salamatou, the young lady who waited hours at the stadium just to snag a photograph with Mikel as soon as he stepped off the team bus on Sunday, to the excited kids and their parents who badgered him for pictures, to the journalists who took turns to take pictures with him as he was dressing up to join his colleagues in training, they all showed love and admiration for Mikel.

And on matchday, the former Chelsea star was applauded off by most of the 35,000 at the Stade Omnisport Ahmadou Ahidjo as he was being replaced.

Mikel’s name is the first one mentioned by Cameroonians when discussing Nigerian players. Some have grown to admire him because of his talent, some for his longevity in the Nigeria team, some for his time at Chelsea, and some of the ladies probably for his good looks, although the pretty Salamatou said she had been a Mikel fan ever since his junior international days. 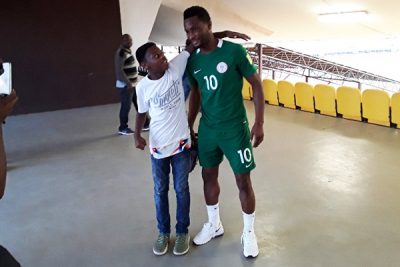