Former Super Eagles goalkeeper and goalkeeper trainer Ike Shorunmu has highlighted the qualities a goalkeeper should possess to make a World Cup squad. In this interview with BAMIDELE BOLUWAJI, the ex-international says Nigeria will miss goalkeeper Carl Ikeme at the World Cup…

–What qualities do you think a goalkeeper should have to be able to feature at a major tournament like the World Cup?

For me, a goalkeeper should have a good height, be calculative and have sharp eyes to monitor the movement of every player on the field. As the last man in the team, you need a goalkeeper who will be able to read the match and know virtually every movement of his opponents. A goalkeeper also needs to be focused and have good communication with other players on the field. His ability to communicate with other players will also help him to organize his team. There are times some defenders will be where they are not expected to be and he may not know but if you have a good goalkeeper, he can easily call his attention or call another player to cover up for him. And finally, a goalkeeper must believe in himself and not feel jittery whatever the caliber of opponent he is playing against.

–Presently, we have Ikechukwu Ezenwa, Francis Uzoho, Daniel Akpeyi and Dele Ajiboye in the Eagles pre-World Cup camp in Uyo.Who among these four goalkeepers do you think actually has the qualities you have mentioned above?

When you look at the four goalkeepers, you will be able to know those that have these qualities and I am sure the coaches have been monitoring the goalkeepers and know the ones who meet their needs. They are all good goalkeepers who have over the years proven their qualities in their various clubs and at several tournaments as well but it is left for the coaches to pick their choice.

–If you were to be the goalkeeper trainer for the Super Eagles, who among the four goalkeepers in camp presently would you pick as your first choice?

It is difficult because I am not in the team and I have not trained with any of them in recent times to know the level of their fitness and readiness because these are factors any coach needs to pick his players. I am sure that the goalkeeper trainers in the team know what they want and how to get it from the four goalkeepers but I can tell you that they are all good players.

–Does experience really matter in choosing a goalkeeper for a major tournament like the World Cup?

It depends on the calibre and qualities of the goalkeepers you have in the country. If you have many of them who are doing well and then you can begin to talk about the requirements for you to be able to pick your best. If you have extremely good goalkeepers playing professional football abroad, who play regularly, you can also look at their experiences and exposure to decide on who you want to pick as your first choice. For a tournament like the World Cup, you honestly need your best keeper who has all the qualities to be in the post because at that level experience will go a long way in helping any goalkeeper to overcome fear from the opponents.

Oh…definitely. He was the first choice goalkeeper before the news about his health came out and I am sure the coach will not be happy about that. Our prayer always is for God to heal him. He contributed immensely to the World Cup ticket and we really appreciate him for that. Nigeria will definitely miss him but that does not mean that those we have there will not do their best, we just have to support them as well.

–As a former goalkeeper, how can you assess each of the goalkeepers? 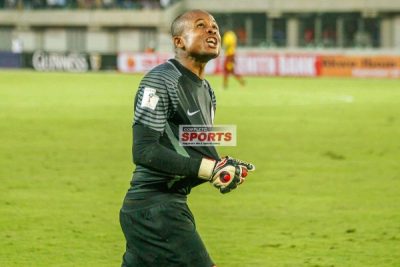 We have seen this guy in several tournaments and he has not done badly. He has experience as well because for a goalkeeper who has played in continental competitions, I will say he has exposure. He played some of the games that qualified Nigeria for the World Cup and he can get better though we need to build his confidence as well but he is a good keeper. 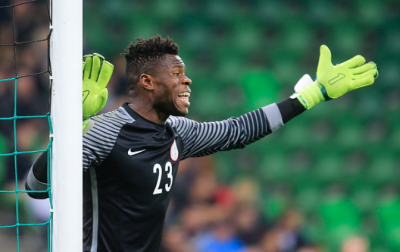 This is a young goalkeeper whom we have not really seen much of but with the games he has played, I think he has also shown what he can do. Playing abroad can also help him but he needs to get established in the team so that he will be able to give his best.

This is another good goalkeeper who we all know as well though he has not been a regular in the Super Eagles but he has enough experience as a goalkeeper. 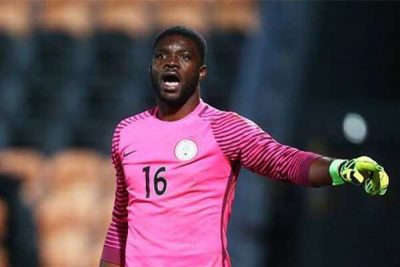 He is another good goalkeeper. He played here in Nigeria before he moved to South Africa and I can say he also has a good quality. We just have to encourage all the goalkeepers and support them as well.

–Tell us about your experience and how you made the team to the 2002 World Cup?

You all know my story and how I eventually made it to the World Cup in Korea/ Japan in 2002. I was the youngest goalkeeper in the Super Eagles in 1994 where we had Peter Rufai, Alloy Agu and Wilfred Agbonibare. Clemens Westerhof was the coach then. We were all committed and in good shape for the World Cup and it was very difficult for Westerhof to drop any of us from the team. But we all knew he could only go with three goalkeepers and he had to call me to his room and told me that as the youngest goalkeeper in camp, he wouldn’t take me to the 1994 World Cup but I had agreat future with the team. Well, the rest is history.

Another opportunity came in 1998 for the World Cup in France, after trying all my best in camp and it was sure I would make the team but I sustained an injury just about a month to the World Cup and that was how I missed it again. That was very painful but I am not wiser than God, he knew why it was so. And finally, I made it in 2002 at Korea/Japan and I really thank God for that.

–Finally, what advice will you give to the Super Eagles goalkeeper trainers?

They are competent enough to know what they want but the only advice I will give is for the goalkeepers to work really hard and be ready to support one another. We still have some friendly matches to play and I believe they can use that to correct their mistakes. For me, Nigeria will do well in Russia this summer.