Simeone’s Atletico Madrid defeated Olympique Marseille 3-0 in the final to win their third title in the history of the competition.

The win banished the horror of losing out in the UEFA Champions League final twice to Real Madrid in 2014 and 2016.

A brace from Antoine Griezmann and another goal from Gabi handed Atletico Madrid their second UEFA Europa League title under Simeone.

Simeone who watched the final from the stands following a four-match European ban for insulting a referee during their semi-final first leg with Arsenal, praised his side’s for their hard work.

“We’re very happy. We’ve been working very well these past years,” Simeone said after the match.

“We’ve always said that the best way to get back to winning ways is by insisting.

“The coaching staff have been lucky enough to find very strong men and footballers who have been improving year after year. 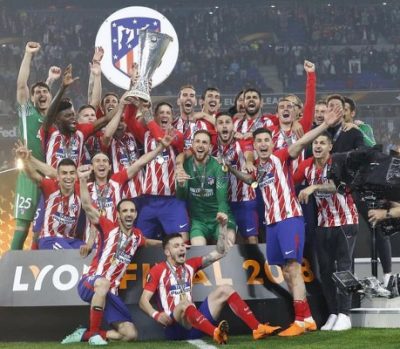 “I have a great communion with my players and I can be at home or in the hotel but they will still play the same way.”

“I’ve never given him anything,” Simeone said in his post-match press conference.

“For Fernando, it’s a dream come true (winning the Europa League), I hope the crowd explodes on Sunday, he’s a fantastic kid, everything he’s achieved has been earned by him.”

On Antoine Greizmann who was the man of the match in the final, Simeone said he wasn’t surprised at the Frenchman’s feat.

“He didn’t have to prove anything, he had already demonstrated it through all these years,” he remarked.

“He just confirmed what I already knew. I hope he is happy, and hopefully, he will continue with us.”