2018 UEFA Super Cup champions, Atletico Madrid, are set for their first match of the LaLiga Santander season at Valencia, and manager Diego Simeone wants to maintain his team’s firebrand style that had Real Madrid reeling at the A. Le Coq Arena Tallinn by unleashing the bulk of that selection on the home side at Mestalla on Monday

According to Marca, which monitored Atletico’s training session in Madrid Saturday morning before they left for Valencia on Sunday, the only changes from the side which overcame Real Madrid to win the Super Cup are the suspended Lucas making way for Filipe Luis and Rodri being replaced by Corre. 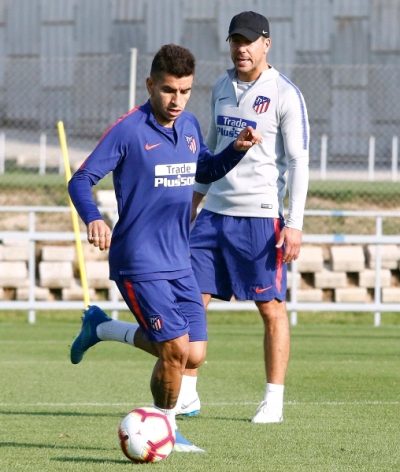 Diego Simeone’s players completed the first part of the session indoors in the gym before taking to the main pitch under the instructions of Profe Ortega.

They did it on a morning where good vibes were very much evident among the players.

The was witnessed in the rondos at the beginning of the outdoor segment of training, where laughter and jokes emanated from the squad.

Atletico still had one more session on Saturday evening before travelling to Valencia on Sunday, but it was Saturday’s first outing in which Cholo insisted on using the same XI he rehearsed with on Friday. 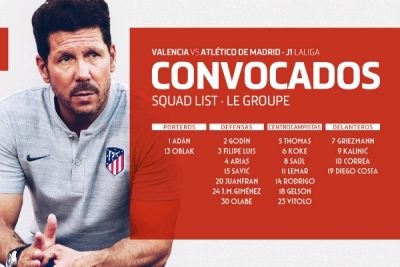 That came from having Jan Oblak between the posts and a defence of Juanfran, Stefan Savic, Diego Godin and Filipe Luis.

Angel Correa and Thomas Lemar will join Koke and Saul in the midfield four, while Antoine Griezmann and Diego Costa lead the line.