Following the Super Eagles impressive win against Iceland in their second Group D game of the Russia 2018 FIFA World Cup, completesportsnigeria.com’s JAMES AGBEREBI analyses the fallouts from the game…

In the game against Croatia, the Super Eagles filed out in a 4-3-3 formation which backfired as they were out-thought and overrun.

But against Iceland, coach Gernot Rohr decided to switch to a 3-5-2 formation which yielded the needed result.

Unlike in the first game against Iceland, the Super Eagles had more bodies in the midfield
which gave Oghenekaro Etebo the licence to bomb forward and cause the opposition problems.

Also the defense had more protection in front of them which afforded them the chance to carry out their task.

And in attack, the Icelandic defenders had their hands full containing two quick forwards in Ahmed Musa and Kelechi Iheanacho who tormented them non-stop.

– SIGNS OF IMPROVEMENT ON SET-PIECES/CROSSES

The Super Eagles showed that they have learnt their lessons on the issue of defending set-pieces and dangerous crosses.

Prior to the game against Iceland, there were fears that the Super Eagles would find it tough containing the Europeans who are notorious when it comes to taking advantage of set-pieces.

But they came up against a Super Eagles side that showed they have learnt from their previous mistakes as they dealt with everything that was thrown at them by the Icelandic players.

Francis Uzoho punched/caught dangerous set plays while the defenders played their part in heading away almost everything flung into the box.

– SUPER EAGLES WERE MORE DIRECT IN THEIR APPROACH

Following a below-par first-half display, former England international and ex-Tottenham Hotspur manager Tim Sherwood (speaking as a pundit on SuperSport analysing the game between Nigeria and Iceland), posited that the Super Eagles is known for being a direct team, not prone to possession-based style of play.

And true to his analysis, the Super Eagles went more direct in the second half and were rewarded with Ahmed Musa scoring two goals.

The change in approach was evident early in the second half as Oghenekaro Etebo had the Super Eagles’ first attempt on goal as he drove straight at the opposition defence but was unlucky to see his low shot saved.

But it was a sign of things to come as the Super Eagles kept going direct, abandoning the idea of just keeping possession. 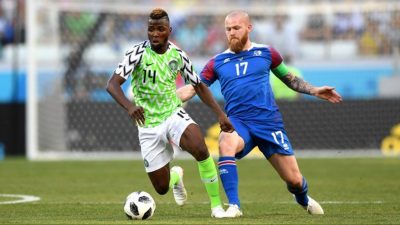 – BEING SLOW OFF THE BLOCK STILL A WORRY

Though the Super Eagles got the all-important win against Iceland, they had to wait until the second half before going all out for the win.

It was the same problem they had against Croatia which saw them concede first and never recovered.

Against the best teams, it will be difficult to find a way back as Croatia demonstrated. And going into the game against Argentina, they cannot afford to be on the back foot from the start because it might be disastrous.

– TYRONNE EBUEHI OFFERED MORE AS A WING-BACK THAN BRYAN IDOWU

Before the introduction of Tyronne Ebuehi, the left wing-back position of the Super Eagles manned by Bryan Idowu was ineffective.

Idowu was more content in carrying out his defensive duties rather than bombing forward to offer support to the Super Eagles’ attack.

His inability to move forward made the Super Eagles wing-back position lopsided as Victor Moses was the only one doing what was expected of him which led to the opening goal.

But with the introduction of Ebuehi, that was finally resolved as he got forward to assist in the attack and also did his defensive duties, bar giving away the penalty.

Following the decision of Gernot Rohr to switch to a back three which saw the introduction of Kenneth Omeruo, there was sanity and stability in the Super Eagles defence.

Omeruo being part of the defence gave the duo of Leon Balogun and William Troost-Ekong the freedom to occasional go upfield as he was always the last man to mop things up. 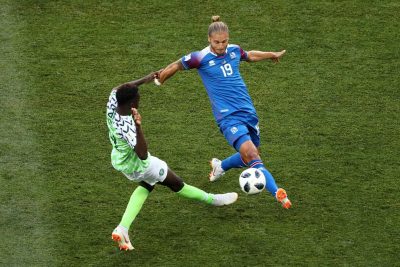