Solskjaer: I Want To Do Good Enough Man United Job, Have Fans Sing My Name Manchester United’s interim manager Ole Gunnar Solskjaer is licking his lips at the prospect of licking the Red devils into ship shape, to become the pride of their teeming supporters and have them sing his name in appreciation of a job well done.

It was the first time United have scored so many goals in a League game since Sir Alex Ferguson retired with a 5-5 draw at West Brom in May 2013, and a clear sign that Solskjaer intends being more cavalier than his predecessors Jose Mourinho, Louis van Gaal and David Moyes. 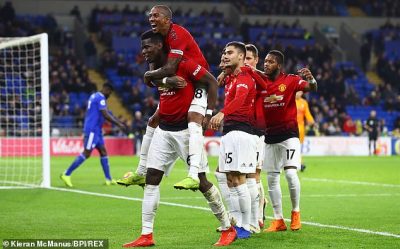 The former United striker hopes to make the most of the attacking talent at the club, and Marcus Rashford, Anthony Martial and Jesse Lingard (twice) all scored at Cardiff.

‘The attacking philosophy is in the walls of Man United,’ said Solskjaer. ‘That’s tradition, that’s how we want to play. Cardiff was a reflection of what we want. We spoke about how when we get one goal, we want to get two. When we get two, we want three. That’s the nature of the club.

‘It’s not going to happen every game where we create chances like we did (against Cardiff) but you’ve got to try.

‘With the pace we’ve got up front, I don’t think any team would like Rashford, Martial, Lingard and (Paul) Pogba running at them.’

Solskjaer scoffed at suggestions that United may have set the bar too high by winning so handsomely in his first game and called on his team to be even better against Huddersfield.

‘You can’t set the bar too high,’ he added. ‘They’re setting the standard. The players who play for this club have high standards. It’s not like they were outperforming themselves (against Cardiff). We can be better.’

Solskjaer admits it will be an emotional experience leading United at Old Trafford where he is revered as a player, scoring the winning goal in the 1999 Champions League final as well as winning six Premier League titles and the FA Cup twice.

‘I just hope in the next five months I’ll do a good enough job for them to keep singing my name,’ he added.

United have struggled at home this season and Solskjaer wants to return it to a place where they enjoy playing and opponents fear to tread.

‘That comes when you sign for Man United,’ he said. ‘You know you’re going to play in front of the best fans in the world.