England manager Gareth Southgate claims that the Three Lions have a golden chance to win the 2018 FIFA World Cup in Russia but warns that they must not be carried away by their progress.

England last won a major tournament in 1966 and having reached the quarter-finals of the competition edging Colombia 4-3 on penalties after both sides were locked at 1-1 after extra time.

Ahead of their quarter-final clash against Sweden on Saturday at the Samara Arena, Southgate said: “Although our team will be better in two years with more life experience, maybe the cards on injuries and things won’t fall as kindly and we won’t get this opportunity again,’ he told ITV News. 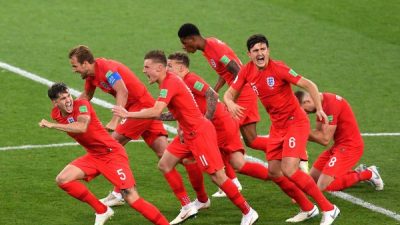 “It’s dangerous if I start to get carried away, but I’m proud of the way we’re playing.”

“Football can bring connection through a country and I’m delighted we are exciting people, bringing enjoyment and we want to keep it going.”

Should England beat Sweden at the Samara Arena on Saturday they will face the victor from Russia-Croatia in Wednesday evening’s semi-final in Moscow.