Southgate: We Feel Pain Of Defeat To Croatia, But Country Proud Of Our Achievement In Russia England coach, Gareth Southgate, says that he is pleased with his side despite their semi-final defeat to Croatia at the 2018 FIFA World Cup in Russia, and that their people are proud of the team’s overall achievement in Russia, Completesportsnigeria.com reports.

England side surrendered a one goal lead after Kierian Trippier’s curtain-raiser in the fifth minute as Ivan Perisic and Mario Mandzukic’s goals secured the win for Croatia.

“At the moment we all feel the pain of the defeat. Did we expect to be in this position? I don’t think realistically any of us did,” Southgate said during his post-match interview. 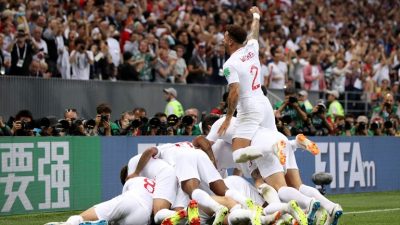 “But when you’ve got to this pint and you’ve played in the way we have and played as well as we have in the first half you want to take those opportunities in life.

“The dressing room is a very difficult place at the moment. But what I will say is I’m remarkably proud of a group of players who have really advanced.

“I think the reaction of the supporters to them, compared to two years ago, tells them that, first and foremost, that experiences with England can be positive, the country are very proud of them and the way that they’ve played and there will in time be a lot of positives to take.”