Iran almost pulled off one of the biggest upsets in World Cup history but could only settle for a 1-1 against Portugal in their last Group B game of the Russia 2018 FIFA World Cup on Monday.

The draw saw Portugal progress into the round of 16 of this year’s World Cup after ending the group stage on five points.

Needing all three points, Iran found themselves behind on the stroke of half-time off a superb strike from Ricardo Quaresma.

In the 53rd minute, Cristiano Ronaldo failed to extend Portugal’s lead as he saw his penalty kick saved by Iran keeper Alireza Beiranvand.

The penalty was awarded after the referee consulted the Video Assistance Referee (VAR).

Iran pressed forward and were eventually rewarded as Karim Ansarifard converted from the penalty spot following another VAR decision.

In the 94th minute, Iran almost snatched a late winner but Mehdi Taremi missed a golden chance as he saw his shot hit the side netting.

In the other Group B game, Spain forced Morocco to a 2-2 draw which means they finish top on five points but on better goals scored from Portugal.

Morocco took the lead in the 14th minute as Khalid Boutaib raced towards goal before slotting the ball between the legs of David De Gea after Andres Iniesta gave the ball away in the midfield.

Spain were back on level terms thanks to Isco who finished off a pass from Iniesta.

Morocco went 2-1 up through Youssef En-Nesyri who headed in a corner but Iago Aspas equalised for Spain in the 90th minute after consultation with the VAR. 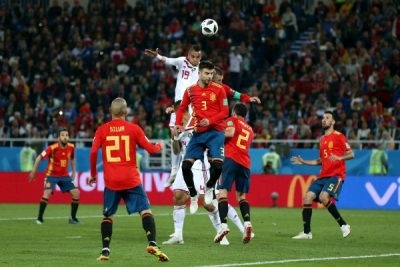 Spain will now take on hosts Russia, who finished second in Group A, in the round of 16 on Saturday while Portugal will face Group A winners Uruguay on Sunday.