Goals from Ousmane Dembele and Gerard Pique cancelled out a goal from Pablo Sarabia for Sevilla. 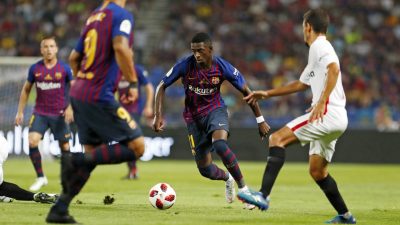 The win saw Lionel Messi lifting his first trophy as Barcelona captain. It was the Argentine’s first match as captain since taking over from Andres Iniesta who has switched to Japanese league.

The win was the sixth time in nine years that Barcelona lifted the Spanish Super Cup.

Sarabia put Sevilla ahead when the video assistant referee gave a goal which had been ruled out for offside.

But Pique levelled from close range before Dembele then fired Barca into the lead.

Ben Yedder had a chance to restore parity from the penalty, but Marc-Andre ter Stegen saved a last-minute penalty as Barcelona clinched their first title of the season.