Spartak Moscow palyed out a 1-1 draw with Liverpool in Tuesday night’s Champions League match and Massimo Carrera, the Italian manager of the Russian champions has credited countyman and Chelsea boss Antonio Conte with an assist following his advice prior to the game.

The Russian side were largely second-best in Tuesday’s Group E contest at the Otkrytiye Arena, showing little attacking ambition.

But, having been given something to cling to when Fernando’s free-kick opened the scoring, they ultimately settled for a solid point following Philippe Coutinho’s leveller. 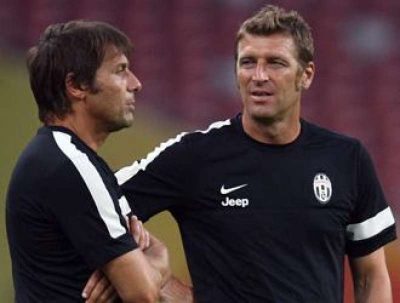 And Carrera revealed that advice from Italian countryman Conte played a part in the result.

“During the conversation we talked about Liverpool for just a couple of minutes,” he said.

“We more discussed the situation in our teams, personal affairs, vacation, but what he said about the British, I needed.”

Carrera added: “We played a great game against a very good team. I don’t have any complaints about my team’s performance.

“I just want to praise everyone. Am I happy with the result? Yes, we got a draw against a very good team.”

Carrera played with Conte at Juventus and was part of his coaching team in Turin and during his stint at the helm of Italy.

He rejected the chance to join Conte at Chelsea in order to pursue his own managerial career in Russia.