St. Jude’s Girls Secondary School, Bayelsa on Thursday, May 10th won the 2018 MILO Basketball Championship (Girls Category) after a 23-15 victory over Yejide Girls Grammar School, Ibadan.
St. Jude’s Girls Secondary School and Yejide Girls Grammar School, Ibadan for the second consecutive year, squared up at the National Stadium, Surulere, Lagos to kick off an exciting day of the National Finals which capped off another fantastic edition of the MILO Basketball Championship.

The 2018 edition of the MILO Basketball Championship was also the 20th anniversary of the competition and games on the day of the National Finals truly captured the essence of it.
The girls from Bayelsa ran into a quick lead, getting on the rebounds and switching straight to attack to score some points. 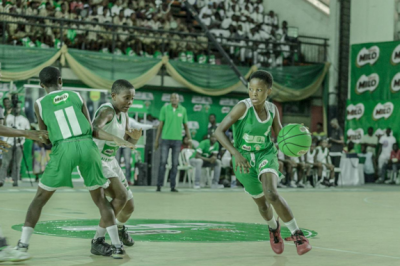 They got in front early in the game and soon established a two-point lead.
As the first quarter wore on, their confidence grew, attacking the rim at any of their forward runs.
The girls from Bayelsa finished the first quarter with a six-point lead to show for their dominance.
St. Jude’s Girls started the second quarter brightly, holding on to the ball but missing most of their shots.
They manage to extend their lead but were made to pay for the missed shots as Yejide Girls Grammar School came back in the game.

But the girls from Ibadan started their comeback a little too late and could only manage 15 points at the end of the final quarter to the 23 points by their opponents from Bayelsa.
In the end, it was 23-15 to St. Jude’s Girls Secondary School to win the 2018 MILO Basketball Championship (Girls Category). 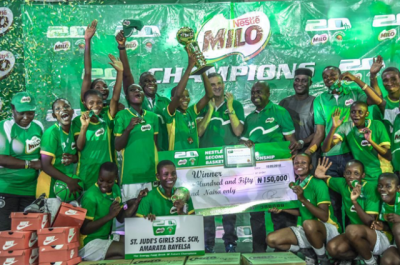 This is the fifth title for the girls from Bayelsa after winning the Championship in 2012, 2013, 2015, 2017 and this year.
Coach of the winning team Tony Nelson was delighted with the win which according to him, is a befitting reward for his girls who have worked very hard.
“I’m so excited to see them happy after winning, they worked really hard for it and it will be a valuable lesson to them for the rest of their lives,” Nelson told Pulse Sports after the game.
“Whether they continue to play basketball or not, it will be a valuable lesson to them that when you work hard, you will reap the benefits.”

This is the second consecutive loss at the final of the MILO Basketball Championship for Yejide Girls Grammar School but coach Yemi Abiodun believes it is a sign of progress.
“It shows we are still very good because most of the players we had last year are now past the age limit,” Abiodun told Pulse Sports.
“These are just new girls and we have managed to get to the final again, I’m very pleased.”