Croatia have qualified for the quarter-finals of this year’s FIFA World Cup in Russia after defeating Denmark 3-2 on penalties after regulation time ended 1-1.

This is the first time Croatia would progress into the quarter-finals of the World Cup after they made the last eight at their debut at the 1998 World Cup in France.

Denmark got off to the perfect start thanks to Mathias Jorgensen in the second minute, who profited from a goal mouth scramble.

Just two minutes after Denmark’s goal, Mario Mandzukic equalised for Croatia as he finished off a rebound to make it 1-1.

The game went into extra-time (the first time both countries would ever play in extra-time at a FIFA World Cup) and with just four minutes remaining, Luka Modric missed a big opportunity as his penalty was saved by Kasper Schmeichel after Jorgensen fouled Ante Rebic inside the box. 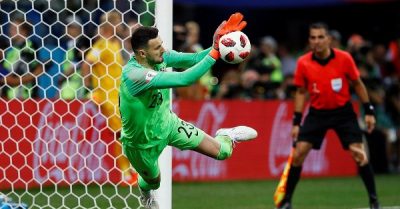 And in the penalty shootout, Ivan Rakitic converted the decisive kick to send Croatia into the next round.

The last time Croatia and Denmark met at a major tournament was in the group stage at the 1996 European Championship in England with Croatia winning 3-0.

Croatia will face hosts Russia in the quarter-finals on Saturday, July 7 in Sochi.

Russia shocked 2010 World Cup winners Spain in their round of 16 clash earlier on Sunday, edging them 4-3 on penalties after 120 minutes of football ended 1-1.

Igor Akinfeev was the hero as he saved both Koke and Iago Aspas’ spot kicks to send Russia into the last eight.