By Adeboye Amosu:
Nigeria forward, Isaac Success scored his first EPL goal of the season for Watford who defeated Huddersfield 3-0 at the Vicarage Road Stadium on Saturday, reports Completesportsnigeria.com. 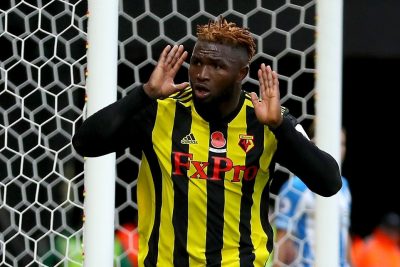 It was his second ever goal for the Hornets in what was his 29th appearance for the club and second start of the campaign.

Success’ only EPL goal before today’s game was scored over two years ago in the 2-2 draw with visiting Bournemouth.

He made his first start of the season in the 2-0 win against Wolverhampton Wanderers last weekend.

The former Granada striker was replaced by Andre Gray seven minutes from time.

Roberto Pereyra and Gerard Deulofeu scored Watford’s two other goals in the game.

At the AMEX Stadium, Leon Balogun was again left on the bench for the entire 90 minutes in Brighton & Hove Albion’s 1-0 home win against Wolverhampton Wanderers.

Glen Murray netted the decisive goal for the Seagulls in the 48th minute.

Balogun has made just two appearances for Brighton this season.

Liverpool moved to top position in the EPL table after a comprehensive 4-1 home win against Cardiff City at the Anfield Stadium.

Senegalese forward, Saido Mane was on target twice for the Red Devils in the game, with Mohamed Salah and Xerdran Shaqiri scoring the other goals.