Success: My Fitness Levels Good, Will Give More To Watford, Fans By Adeboye Amosu:
Nigerian forward, Isaac Success,says he is determined to do more for Watford and their teeming fans following his impressive showing in the club’s defeat to Tottenham Hotspur in their Carabao Cup Third Round clash on Wednesday, reports Completesportsnigeria.com.

Watford exited the competition following a 4-2 penalty shoot-out defeat to Spurs aftsr sides battled to a 2-2 draw in regulation time.

Success,22, scored the Hornets’ opening goal in the game and proved a handful for the opposing defenders.

It was his second goal from two appearances in the Carabao Cup this season.

The former Nigeria youth international has struggled to pin down a regular shirt since linking up with Watford due to injuries and loss of form. 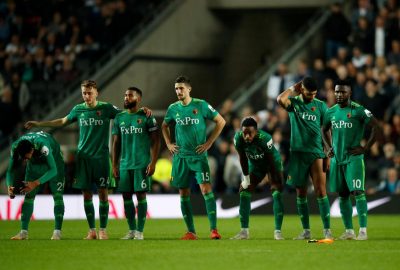 Success also failed to make an impact during a loan spell in the second part of last season at Spanish club, Malaga.

But he is gradually proving his class at the club following an impressive pre-season campaign.

“My fitness levels are good and hopefully, I will be able to give more to Watford and the fans,” Success told Harrow Times.

“Week in week out I want to be part of the team and watch them grow.”