Isaac Success made a cameo appearance for Watford who secured their third English Premier League win of the season, defeating Crystal Palace 2-1 at the Vicarage Road on Sunday,reports Completesportsnigeria.com.

Second half goals from Roberto Pereyra and Jose Holebas handed Javi Gracia’s men a nervy win in the encounter.

The game was Success’ third substitute appearance for the Hornets. The Nigerian striker replaced Troy Deeney in additional time of the game.

Gracia’s men who had earlier beaten Brighton and Burnley in their opening two games were held for a goalless first half.

Pereyra made it three goals in as many games with a stunning strike in the 53rd minute before winger Holebas’ cross caught out Wayne Hennessey to nestle in the net in the 71st minute.

Zaha pulled one back for Crystal Palace firing his shot past Ben Forster legs to make it 2-1 with nine minute left. 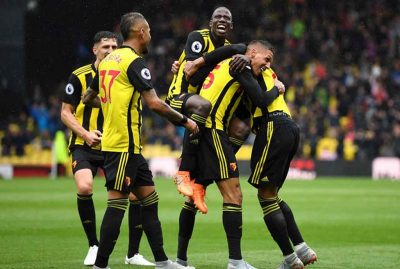 The goal was a landmark goal for Zaha who becomes Palace’s all-time highest Premier League goalscorer with 24 goals, one ahead of Chris Armstrong.

The win sees Watford move to second spot in the Premier League table with nine points, just behind Liverpool on goal difference while Palace stay mid-table in 11th position.