Sudan Coach Logarusic: We Didn’t Deserve The Defeat To Nigeria, Ajiboye Is My MOTM By Johnny Edward: Desert Hawks of Sudan coach, Zdravko Logarusic, has praised his players’ spirited performance in their CHAN 2018 semi-final loss to Nigeria, and insists that his side didn’t deserve to lose to the Salisu Yusuf’s team, Completesportsnigeria.com (CSN) reports.

Gabriel Okechukwu made the difference scoring the only goal of the game in the 17th minute to end Sudan’s fairy tale run in the tournament.

Logarusic noted that his team created a plethora of scoring chances in the game. He also praised Nigeria’s substitute goalkeeper, Dele Ajiboye for the stunning saves he made during the game after he came on in the first half for injured captain and first choice goalkeeper, Ikechukwu Ezenwa.

The Croatia added: “He (Oladele Ajiboye) started well and for me, he is the Man of The Match. He is the one who gave Nigeria the final slot. When they needed help at the back, he was the man who saved them. 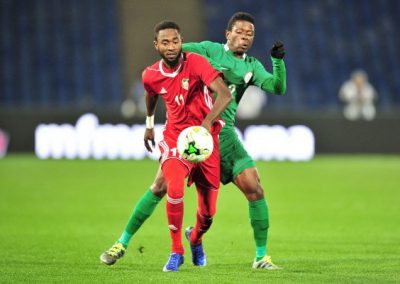 Maaz Abdelraheem Gismalla of Sudan challenged by Moses Okoro Osas of Nigeria during the 2018 CHAN semifinals football game between Sudan and Nigeria at the Grand stade Marrakech in Marrakech, Morocco on 31 January 2017 ©Samuel Shivambu/BackpagePix

“Nigeria put the ball in the net, and that made the difference. What is important after five weeks of being in charge is that we are seeing some progress and are playing nice football.

“We have boys who can compete against any country. Today, we did not play against just any country; it was Nigeria, which is a giant in football.

“It was good for African football. We have picked some experience and will prepare for the next game (Third Place match vs Libya).

“It was a very high level game with high challenges and many chances.”